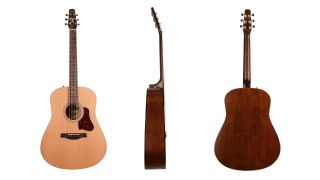 We’re living in a unique time for acoustic guitar manufacturers. Today, there’s a real sweet spot around the $1,000 mark: it’s where some of the super big brands place stripped-down guitars that do away with some of the visual flash in order to give you a sweet prestige-name instrument. It’s also where some of the more wallet-friendly brands place their upgraded guitars – the ones with extra flash and more sophisticated preamps.

Ask any guitar store, and they’ll tell you that acoustic guitars are sold differently to electrics: often, a customer will walk in with an idea of what brand and model electric guitar they want (“Dude, I need a sunburst Les Paul – like Pagey!”). But acoustic guitars are usually a different story. A player will have a particular musical need (“I need a thin neck.” “I need a versatile preamp.” “I don’t need to mic it up, so don’t even show me models with pickups.” “It has to have a cutaway...”), and the store will work with the customer to put guitars into their hands that fit those requirements.

You might walk in with a Martin in the back of your mind and walk out with a Seagull. Or maybe you thought Ovations were goofy, until you had the chance to sit down and try one. We thought we’d give you a look at some great guitars that come in around – or under – a thousand bucks. Remember, though: nothing beats getting your fingers wrapped around one for real.

Fender has done a lot of research into what makes people play the guitar, and what makes them keep playing the guitar. This research is funnelled into their Fender Play educational app, but it’s also used to inform designs like the Redondo, which is essentially a dreadnaught acoustic but with one very big and important twist: the neck is way more comfortable than a typical dreadnaught.

It’s an easy-to-play, slim-taper ‘C’ profile inspired by Fender’s electric guitars. If you’ve played a modern Strat or Tele, you’ll be very at home with this neck. That makes it great for smaller hands, or for players who don’t necessarily need an acoustic as their main instrument – maybe they just need to pick an acoustic up for a song or two in a covers set without killing their fingertips for the rest of the night.

The Redondo Player has a Fishman preamp with Bass, Treble and Volume knobs, plus a built-in tuner that’s very easy to see and use. It has a slightly sweeter sound than many dreadnaughts, and the neck is an absolute joy to play. There are other models in the series (the Redondo Special and Redondo Classic) which add upgraded woods and electronics, but the Redondo Player comes in at just $699.

Gibson introduced the Hummingbird in 1960, and you may notice that a heck of a lot of players seemed to favour them in the 1970s. By then, the first Hummingbirds had sweetened quite nicely, emphasising the guitar’s versatility; it’s a great fingerpicker, but it’s also very happy being strummed hard and loud.

If you want a Gibson Hummingbird, you’re looking at an RRP of $6,999 – worth it if you have that much to spend, but if you don’t, then Epiphone’s version is a heck of a lot of guitar at a fraction of the cost.

It has a SlimTaper ‘D’ profile neck, solid Spruce top (which will age and sweeten just like those old Gibsons, getting better with age and use), with select mahogany back, sides and neck. It comes with a Shadow ePerformer preamp with Volume, Treble and Bass controls, and it sounds great miced up, too. It’s a classic do-everything dreadnaught with an RRP of $829.

Canada’s Seagull Guitars (owned by Godin) are one of the classic companies that make you say, “Whoa, I didn’t consider this brand but now that I’ve played one, I think I just found my new guitar!”

The S6 Slim is considered one of the best representations of everything the company is about; it’s comfortable enough for entry-level players to get used to without cramping their hands up, it’s visually distinctive and stylish particularly thanks to that tapered headstock, it’s made of some damn fine woods, and it’s a classic-sounding dreadnaught that immediately sounds like something your audience will recognise as a familiar guitar tone.

Fingerpicking or strumming – even slide – this is a great all-rounder that sits in the sweet-spot between bling and bang-for-buck. It can be ordered with optional Godin Quantum 1 electronics, and is hand-crafted in LaPatrie, Quebec, Canada. What’s more, it runs for a notably conservative $999.

Martin guitars command a pretty penny because they’re damn fine instruments made to very high standards, so it’s tough to find one anywhere near a thousand bucks. The DJR just creeps into that sweet spot, though: with an RRP of $1,199, you’ll be able to walk away with one somewhere just north of that $1K mark.

It’s a spruce-topped dreadnaught Junior, shrunk down to 15/16ths of the full Martin dreadnaught size. The scale length is 24 inches, making it a little easier on the fingers than a traditionally-sized dreaddy, and it’s constructed with quarter-inch, high- performance X-bracing, and a single asymmetrical tone bar to really maximise the tone available from the slightly undersized body.

It comes with the Fishman Sonitone Sound Reinforcement System, plus a nylon gig bag.

Taylor has followed a similar track to Fender in the design of the A10, specifically taking into account the things that tend to turn new guitar players off sticking with the instrument.

Special attention is paid to action and intonation, to make sure it’s easy to play and doesn’t sound weirdly out-of-tune – and of course, Taylor is never going to let a guitar out of their warehouse if it doesn’t sound good. The A10 uses a solid Sitka top to achieve its full frequency response, while a contoured upper bout makes things easy on your picking arm.

It’s also ridiculously low-priced for a full-sized Taylor, with an RRP of $1,049 which will see it come in well under $1,000 if you know how to shop. This one definitely fits into the category of ‘stripped-back premium-brand guitar’ rather than the aforementioned ‘gussied-up entry-level instrument.’ It doesn’t have a preamp, though, so if you need to plug it in, you’ll have to set aside some extra bucks for some kind of pickup.

At least you can rest easy knowing you’re starting from a damn good place.

We all know Yamaha makes great entry-level guitars with exceptional quality control – heck, many players reading this probably started on a Yamaha – but the quality continues to climb as you work your way upwards through the price list.

This all works by the TransAcoustic device interacting with the top of the instrument itself, and it makes the whole guitar feel like it’s absolutely alive. The RRP on these little beauties is a quaint $999.