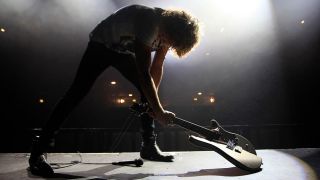 For a decade or more, headlines featuring the word ‘guitar’ on mainstream news outlets have been reliably prefaced with ‘the death of’. These premature obituaries blame everything from the rise of EDM and bedroom producers to declining attention spans, not to mention the demise of the guitar hero as we know it. But all have failed to blame another culprit: guitarists themselves.

We all love guitar in one shape or form, but in recent months, takedown videos have become a worrying trend, online commentary is at peak hysteria and a new shred arms race has erupted - something that even led to allegations of fake playing - all of which doesn’t exactly create a welcoming environment for anyone seeking to pick up a six-string for the first time.

More than any other instrument, there’s a competitiveness among guitar players that generational shifts are apparently struggling to shake off. This sense of rivalry is inherent in the majority of artforms, but traditionally, guitarists are used to being the focal point of any band - and perhaps that’s why we’re prone to moaning when the wider guitardom doesn’t quite meet our expectations of tone, genre or technique.

Case in point: GW recently shared an article on how to tune your guitar to drop D by ear. Not only was this a useful topic for beginners, but we also knew people were actively looking up how to do this stuff. The Facebook comment thread was fast and furious. Here are some choice selections:

Having grown up in the mid-Noughties heyday of the gear-forum boom myself, I can testify that online guitar communities have the potential to be hostile places to spend your time. We’ve all seen comments ragging on the latest pop upstart who dared wield an acoustic, moaning about an indie player relying on delay pedals to do the heavy lifting, or tearing apart any tone that isn’t a ’59 Les Paul played through a Klon and a Dumble.

After all, we’re famously resistant to change. Pentatonic scales? Still the basis of the majority of our playing. Our favorite tones? Tube-based or emulations thereof. The reason we love Gibson again? They’re making guitars like they used to. We could go on.

But how did guitarists come to resent our fellow kind quite so much? First off, we’re taught to be a bit snobbish from the outset: it’s the reason we spend hours perfecting our vibrato, and why our living rooms resemble postal-service sorting depots in our quest to capture that elusive perfect tone.

Another is self-esteem. From strumming your first chords to nailing a six-string sweep, playing guitar is an artistic pursuit, and that means we put a lot of ourselves into our performance. It also means we can feel extremely vulnerable - and we lash out when we feel threatened.

And that figures: recent studies found that 73% of independent musicians suffer from mental illness, and musicians are three times more likely to be depressed than other groups.

It also can’t help being exposed to so much otherworldly talent - and next-level criticism - on a daily basis. While YouTube and Instagram have given everyone a potential worldwide audience, they’ve also played host to brutal takedown videos, cruel parodies and toxic commentary.

These online platforms have also brought about a renaissance in shredding, recalling the ’80s need for speed that ushered in a new breed of competitive guitar player, exemplified by the climactic face-off between Steve Vai and Ralph Maccio in ’80s guitar flick-par-excellence Crossroads.

Sure, that era may have encouraged its fair share of guitarists, for whom next-level technique was an aspirational goal, but it probably discouraged just as many, who thought, ‘No way can I do that.’

Which is precisely why the grunge explosion of the early-’90s - where songwriting craft took precedence over fretboard theatrics (as much as we love ’em) - was so important. Without it, we certainly wouldn’t have many of the players we have today, who continue to cite the likes of Kurt Cobain as a formative influence.

You might make the case that being opinionated is just the nature of rock and metal fans, but this particular kind of antagonism towards fellow musicians is fairly unique to guitar players, and doesn’t exist to anywhere near the same degree in the bass and drum world.

Our low-end brethren may share our ethos about rig hang-ups, but when it comes to genre, it’s a very different story, according to Joel McIver, editor of Bass Player and Bass Guitar magazines.

“You’ll get bassists bad-mouthing each other about gear choices, such as whether four, five or six strings is ‘right’ for a bass guitar,” he says.

“But the flipside is that bass transcends genre. We tend not to concern ourselves with whether a given bassist plays funk, or metal, or jazz, or makes weird experimental noises with a pedalboard. If it’s deep and impactful, that’s all that matters in our world.”

“There’s always been a great sense of community and support amongst drummers, regardless of the level they’re at,” he says.

“I’ve interviewed some of the biggest drummers on the planet and I’ve never encountered any secrecy about what they play or how they play it. I believe this willingness to share - and this runs the spectrum from bedroom players to rock stars - has helped progress the artform. Drummers are the dependable ‘person at the back’, the backbone of the music.”

Based on the experiences of team GW, it’s worth noting that the vast majority of guitarists at the top of their game possess a similar mentality: experience is there to be shared, and new players should absolutely be encouraged every step of the way. Look at Paul Gilbert: he’s one of the greatest guitarists of his generation, but he’s also an active guitar teacher. You think he’s going into all those lessons telling kids they suck?

The mantra of guitar circa 2020 needs to be ‘anything goes’. EDM got the jump on guitar-based music because, sonically, it accepted anything and everything: like hip-hop and the rise of sampling in the late-’80s, it doesn’t just embrace creativity; it’s thriving precisely because of it. When the sonic template of each new record is always fresh, it continues to stay relevant - having no boundaries means there’s no limit to the appeal.

And that’s why guitarists need to stay open-minded to keep the instrument alive. Look at John Mayer, who - besides being one of the greatest blues guitarists on the planet - doesn’t even bring his amp to sessions any more, allowing producers to have their way with his guitar sound. Or Polyphia, who look to rap and trap music to make shred cool once again, albeit in an entirely new way.

Even one of the 21st century’s bona fide guitar heroes, Muse frontman Matt Bellamy, claimed that “the guitar has become a textural instrument rather than a lead instrument.” But with advances in pedal and recording technology, there’s no reason the guitar can’t continue to be a leading force in any musical context. Sure, it might not sound like the hot-rodded Marshalls Eddie used to use, but it will continue making an impact on music for generations to come.

After all, anyone who grows up with access to all the music ever made sees no need to abide by genre boundaries - and today’s guitarists need to be operating within that same remit. The daughter of my MusicRadar colleague Ben Rogerson is learning guitar right now, and her favorite artists are Metallica and Taylor Swift. There are no rules any more.

For many players, the guitar is no longer a focus in and of itself; rather, it’s a tool in the same way as a MIDI controller or a synth plugin. And with so many alternative creative outlets, there needs to be a damn good reason to opt for a guitar over anything else, particularly with everything from your phone to Netflix and the PlayStation in the corner vying for your attention.

Fender CEO Andy Mooney, while discussing the fact that 90% of new guitarists abandon the instrument within a year, made a particularly salient point: that people play the guitar for different reasons than some of us did.

“Not everybody wants to be standing with one foot on the monitor with the wind blowing through their hair,” he observes.

“Most people would want to play quietly and solo in their own home, singing along with their favorite songs. And I think we have to embrace them alongside the really gifted virtuoso players that still exist out there.”

And by accepting that, we keep the guitar alive. You don’t have to enjoy the music that’s being made - hell, nobody’s supposed to like everything - but by ushering players of all stripes into the collective fold, we can do more for extending the lifespan of guitar playing than any PR campaign or new guitar launch.

Guitar World will always cover the traditional heroes - we wouldn’t be anywhere without them - but we believe there’s a place for pop alongside shred, indie next to tech-metal. And most importantly, we think there’s a place for guitar in the future of music, whatever form it takes, just as long as we all stick together and foster - not reject - new, original talent.

As one commentator on that drop D tuning article wrote, “Remember, we were all beginners at one point. We all sucked mad fucking shit and had little knowledge about the instrument. That's not a reason to give up your guitar or end your life.”

If we can all just keep that in mind, there’s hope for us yet.