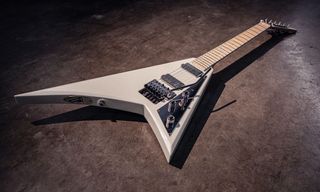 Check our pick of the 10 best metal guitars for shredders

Given that the business of playing metal makes some very specific demands of an electric guitar, a degree of specialism can help no end in finding the right guitar for the job.

Just as there are many types of metal, the metal guitar comes in various guises, too.

Here we are going to take a look at some of them, walking through some of the choices you will face when it comes to pickups, a hard-tail vs floating vibrato, shape, build, and whether a blood splatter finish is too necro for playing your little sister’s eighth-grade graduation ceremony.

What is a heavy metal guitar?

If the original heavy metal guitar was Tony Iommi’s heavily modded 1964 Gibson SG Special, aka ‘Monkey’, then the metal guitar of today is much changed.

Having passed through the febrile evolutionary plane of ‘80s shred guitar, it might take the form of a mutated S-style, hot-rodded with sharper cutaways, enhanced upper-fret access, such as a Jackson Soloist or a Schecter Reaper 6.

Alternatively, we could be looking at next-gen shapes from the likes of B.C. Rich, Jackson et al, guitars that took the late ‘50s modernism of Gibson’s Ted McCarty era – the Flying V and Explorer – and ran with it. Shapes such as the B.C. Rich Warlock and Jackson Kelly are old-school classics, tailor-made for metal.

The last 40 years has witnessed an arm’s race for more gain, played out on pedalboards and guitar amps, but chasing metal tone is a process that starts with your electric guitar pickups.

A vulgar display of pickups

For metal, we’ll typically be looking for high-output humbucking pickups. The rationale is simple. Humbuckers have a fuller tone than single-coils, and with a higher output they will send your amp into overdrive sooner. They also help keep unwanted noise at bay.

Some metal players are moving away from this simple calculus as they look for new textures in gain. Gina Gleason and John Dyer Baizley of Baroness use Fender’s with single-coils, sacrificing beefiness for clarity, using that clarity in heavily processed fuzz tones. It’s an approach that could work in a variety of contexts, not least in the treble-scratch fuzz of black metal.

But for now, let’s stay on this left hand path… Down the high-output humbucker rabbit hole.

The early ‘70s saw the DiMarzio Super Distortion establish itself as the humbucker of choice for rock-metal players. Compared to the low-to-medium output of classic humbuckers like the P.A.F., the Super Distortion was wound to punch the front end of your amp hard, driving it harder. Kiss’s Ace Frehley and Def Leppard’s Phil Collen were early adopters.

The market soon exploded, Seymour Duncan and EMG joining DiMarzio in winding hotter pickups. EMG was a game-changer, popularizing active humbuckers that came with a battery-powered preamp and a searing output.

Ideal for more extreme styles when you want a solid, slightly compressed chug, EMGs found fans in Metallica’s James Hetfield and Kirk Hammett. Before long, a set of active EMG-80/81 or 61/80 humbuckers in the neck and bridge positions became a no-brainer.

Active pickups remain an attractive proposition, capable of keeping that low-end solid, but with so many high-output passive options, with powerful ceramic magnets and DCR readings ~15 kohms, it’s certainly not active or bust. Need some low-end djent power? A Bare Knuckle Painkiller will eat those tones up.

And yet, have these been usurped by Fishman’s Fluence pickups? Used by Stephen Carpenter, Devin Townsend and Tosin Abasi, the Fluence set offers switchable voicings. Time will tell. If you see a guitar you like, check out the pickups and visit their manufacturer’s site. They’ll typically have some helpful spec and will give you an idea of what style they are best suited to.

Playability is crucial. Unless you are playing epically glacial funeral doom, you’re gonna need something shreddable.

There’s no getting around it. Metal is a predominantly shred-adjacent activity. Here we’ll be looking for a reasonably svelte neck profile, say, 20mm deep or less at the first fret with not too much of a taper as it fills out towards the body, and a compound radius fingerboard with jumbo frets.

Of course, a fine player can shred the lacquer off a fat-necked guitar, but a thin neck eases speed. Again, it’s a question of preference.

That goes for the bridge, too. If you want to perform some harmonic dive-bombs, dousing them in reverb for a Doppler effect, you’ll need a floating vibrato with a locking nut – most commonly a Floyd Rose, but just ask Kerry King, a Kahler will get a similar effect.

Those with no need for a whammy, and will be routinely changing your tunings a la Iommi, seek out a guitar with a hard-tail bridge. You’ll spend more time playing. Locking tuners are a bonus if you like to play hard. Remember, this is metal – no prizes for tickling it.

As for super-low tunings, and the bass-heavy hugger-mugger, consider a specialist tool such as a longer-scaled baritone electric or extended-range guitar of 7 or 8-strings.

Hallowed points: Do you need a crazy shape?

If you have the frame to carry off a Dean Razorback or a Jackson Warrior, more power to your elbow. Shapes can be cool, but a note of caution; not all are well-balanced for playing seated.

The V shapes can be notoriously tricky to play seated; you have to wedge it on your thigh and play it a little like a classical player. We’d consider that a small price to play but then the Jackson RR5 has always been one of our favorite metal guitars – or rather, favorite guitars period.

But shapes, pointed edges? They are a question of style. Ultimately, find a guitar with enough power in the pickups and a feel that allows you to express yourself freely, and you’ll make it metal. Oh, if it’s got a blood-splatter finish? Just make sure you write riffs that do it justice.