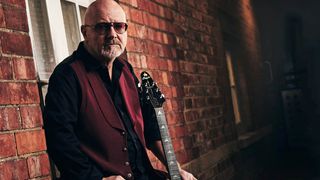 It's almost difficult to fathom. Wishbone Ash, the British rock group not just active but extremely prolific for all of its 50 years in existence, has never been interviewed for this magazine.

“Yes, you’re right,” says only remaining original member Andy Powell on a call from his home in Connecticut. “We’ve been working solidly for all these decades, and almost studiously avoiding the press. So it’s interesting to come out now and be doing a bunch of interviews.”

Guitar World and Powell are engaging in conversation for the first time to talk about the seasoned band’s most recent studio album, titled Coat Of Arms.

Wishbone Ash’s lack of reliance on media exposure throughout all these years, particularly with the U.S. music press, speaks to the group’s fervent following and long-established efforts to reach their fans via social media.

“We were one of the first bands who really understood the idea of social media and the internet, and once we established ourselves there, we realized that we could communicate directly with our community,” Powell tells us. “We already had a loyal following, and social media has allowed everyone all around the world to be linked together.

“But you can also get a lot of traction with an album by having some good PR. You don’t want to necessarily preach to the choir all the time – it’s good to break out every so often, and our new album, Coat Of Arms, has helped us do that.”

Coat of Arms is the 23rd studio album from Wishbone Ash, a group celebrated for its unique blending of prog rock, folk, Southern rock and classical music, with harmonious twin lead guitars always at the forefront of its sound.

“I think a lot of it comes from the approach we have to playing solos and lead parts when we’re onstage – you are commanded to listen to them,” Powell says. “It’s that Seventies approach of ‘Look mom, I’m playing guitar right now.’ ”

Whether it’s the highly pleasing album opener We Stand As One, the nearly eight-minute title track or the ethereal Floreana, Coat of Arms is brimming with all of the hallmarks that have been synonymous with Wishbone Ash for over half a century.

The members of Wishbone Ash, including Powell, co-guitarist Mark Abrahams, bassist Bob Skeat and drummer Joe Crabtree, hope to resume their tour of the U.S. in September and the U.K. in October, though it’s anyone’s guess if the world will be ready for concerts by then.

For the time being, Powell and his cohorts will continue spending their days at home like the rest of us.

“I used to get very antsy after about 10 days or two weeks of being off the road,” says the 70-year-old guitarist and singer. “But I have a good home life, and I do have recreational things that I’m able to enjoy. My family’s all grown up now so I don’t have three kids taking all the energy out of me like I used to. [Laughs] I think you’re just constantly adjusting, and that’s life for everybody.”

Coat of Arms is the band’s 23rd studio album since the release of the self-titled debut in 1970. Between all of the studio albums, live records, compilations and tours, Wishbone Ash hasn’t had much downtime in the last 50 years. In fact, the six years between the previous studio album, Blue Horizon, and Coat of Arms, is one of the longest breaks on record for the group.

“Ironically, during that period, a lot of work was being done in other fields. I wrote a book [Eyes Wide Open: True Tales Of A Wishbone Ash Warrior, 2015], which was one of the hardest things I’ve ever done.

“We were also gigging constantly. Then there was the box set [the 30-disc Vintage Years 1970–1991], which was a three-year production.

“Plus we had all these compilations and live albums and smaller box sets that were being produced around the world, so a lot of the time you’re at home in your office, you’re working on all the licensing and deals that go along with those releases.“

How did you and co-guitarist Mark Abrahams, who joined the group in the spring of 2017, work together on writing the guitar parts for Coat of Arms?

“Mark is a student of the band’s catalog, so he would say things to me like, 'It would be great if we had a song that perhaps referenced back to the New England phase that you guys went through in the mid-Seventies.'“

How did it work in the studio? Did you record mainly the parts you wrote and vice versa?

“That does go on, but I’m more interested in how a song is going to turn out or how the band sounds. For example, going way back, I composed the opening chords to a song called Warrior [from the group’s 1972 album Argus], but I said, 'Hey, Ted [Turner, former Wishbone Ash guitarist], why don’t you play this part because I want to play lead over it.' And that’s the great thing about having two lead guitar players – it gives you that vast palette of possibilities.“

As technology has changed over the years, has your gear changed?

“In some ways, not at all – but in some ways, totally. We didn’t have digital tuners back in the day, so having those now makes a huge difference. Also, when footpedals and effects came in, I went right from using a basic overdrive and a chorus pedal to using racks of digital equipment behind me and switching devices, and now I’m back to using just a few effects under the foot onstage.

“And even though we still use vintage Fender amps in the studio, we’ve also fully embraced profiling amp technology. It gets you where you want to be really quickly and keeps you from killing the music by spending hours trying to get the definitive guitar sound.“

“Exactly. We went through that bloated phase in the late-'70s where we would take a week in a studio just to get a kick drum sound or get a guitar sound just right. We’ve become much more efficient at making music these days, and we recorded this album live in the studio, just like we would have in 1971.“

Tell me about the guitars you used on Coat of Arms.

“It was a mix. Vintage ’52 Telecaster, 1970 Duesenberg, Stratocasters, my original 1967 Flying V. Music Man is a company that I love, and I used those on a couple of lead guitar solos. I also have a few guitars made by Jon Case out of England, and I used those pretty extensively. I’m still a guitar nut – I love guitars.“