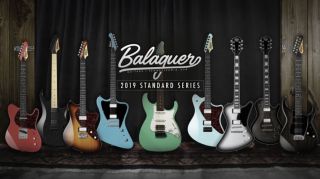 Balaguer says that the series will utilize “some of the best production facilities in the world," with guitars built to its specs, then undergoing a 46-point quality control checklist at Balaguer’s headquarters before being sent out.

Prices for the series begin at $699. The guitars will feature locking tuners and Graph Tech nuts fitted as standard, while a host of other premium specs will also be available.

The Standard Series will be available beginning this March.

For more info, head on over to balaguerguitars.com.