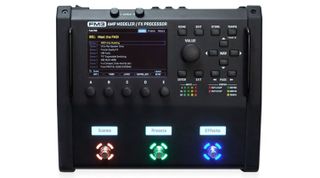 The ARES amp modeling of Fractal's flagship Axe-FX III is built into the FM3, giving it more than 265 models and well over 2,000 speaker cab impulse responses and user locations. It being a Fractal, the FM3 also packs some serious DSP power, featuring a 3-core "Griffin" DSP with one ARM and two SHARC+ cores.

With the same color display and front-panel controls as Fractal's Axe-Fx III, the FM3 has three onboard footswitches with variable-color LED rings and mini LCD displays, each of which can function as tap and hold. They can also be customized to handle different switching tasks with eight different switch layouts.

The FM3 features input, stereo outputs, headphone out, MIDI in and out/thru and 48kHz SPDIF out. Stereo TRS inputs and Humbuster outputs are also available, in addition to 4x4 USB audio and FM3-EDIT functionality.

Effects-wise, the FM3 is packed with drive, delays, reverbs, compressors, EQs, modulation effects, an onboard looper and much more. Structurally, it operates with presets constructed from blocks on a 4x12 grid. There are eight scenes per preset to engage or bypass effects, switch effect channels or adjust levels.

The FM3 also features a Modifier system, which allows users to make real-time sound changes using onboard or remote controllers—one or two FC-12 or FC-6 foot controllers can be connected—in addition to a full-screen tuner and two global EQs.

The release date for the Fractal FM3 has yet to be announced, but when it does become available, it will sell for a $1,399 list price (its direct price will be $999.)

Prospective American or Canadian purchasers can join the waitlist for an FM3 by emailing waitlist@fractalaudio.com.