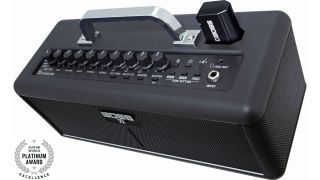 The concept of a guitar amplifier with a built-in wireless receiver seems so obvious that it’s hard to imagine that no one else thought of manufacturing one before now. Yet, here we are more than 40 years after the first mass-produced wireless systems for guitar were introduced, and Boss announces the Katana-Air amplifier, promoted as “the world’s first totally wireless guitar amplifier.” In addition to the way-cool factor of its wireless operation, the Boss Katana-Air is an impressive compact, portable amp for practice and recording, loaded with features like five different amp models, 58 different types of built-in effects, stereo audio streaming via Bluetooth, battery or AC power and the ability to control, edit and program the Katana-Air via an iOS or Android smartphone or tablet with the free Boss Katana-Air app. With its wireless design, compact, lightweight packaging and ability to operate with batteries, the Katana-Air offers guitarists the ultimate experience in play-anywhere power and convenience.

FEATURES Thanks to its elongated rectangular shape and carrying handle, the Katana-Air looks like a micro amp head, but lo-and-behold I discovered that a pair of three-inch speakers are mounted below the controls behind the front panel’s black metal grill. When powered by AC, the amp delivers 30 watts of output, which drops down to 20 watts when the amp is powered by batteries to conserve battery life.

All of the amp’s controls are conveniently mounted on the top panel and consist of knobs for amp type (brown, lead, crunch, clean and acoustic), gain, volume, bass, middle, treble, boost/modulation, delay/FX, reverb and master, plus nine buttons for boost/modulation, delay/FX, reverb, tap tempo, Bluetooth linking, power on/off and engaging channel A, channel B or front panel settings. There are also a 1/8-inch headphone/recording output jack and a ¼-inch input should you choose not to use the wireless transmitter. A rechargeable lithium battery is built into the transmitter, which can be recharged via the dock on the amp’s top panel, or with a mini USB cable connected to a transmitter and the amp’s rear panel USB jack or an external USB charger. The amp’s USB jack also can be used to send audio from the amp to a computer for recording and to play back audio from a computer. The rear panel also features a 1/8-inch auxiliary input for an external sound source.

In addition to AC power, the Katana-Air can be powered by eight AA batteries. The amp operates for about seven hours with alkaline batteries and approximately 10 hours when using rechargeable Ni-MH batteries with a capacity of 2,500 mAh. The fully charged wireless transmitter provides up to 12 hours of continuous operation, but in normal use it lasts much longer thanks to its automatic, motion-sensing standby mode that kicks in when no activity is detected.

While the front panel controls are very straightforward and the amp is extremely easy to program, the Boss Katana-Air app is highly recommended as it provides access to additional parameters, such as the type of effects assigned to the buttons for the boost/modulation, delay/FX and reverb sections, detailed parameters for each effect, line out Air feel and cabinet resonance settings for the line output, USB output levels and more. The app can also store patches, download new patches from the Boss Tone Central library and operate as a tuner.

PERFORMANCE Typical of all Katana products — and Boss, for that matter — the Katana-Air offers a massive selection of rich, expressive sounds and versatile effects. The distortion and clean tones are ideal for any style of music, and the selection of effects is generous and comprehensive.

The performance of the wireless system is flawless. The specs list a maximum effective range of up to 75 feet, but I was able to play through the amp with almost imperceptible latency up to 100 feet away. The transmitter even works reliably through thick walls and floors. It unexpectedly transmitted through the concrete bunker-like walls of my basement to the amp two floors up in my master bedroom. The wireless design combined with the amp’s battery-power option makes it a true “play anywhere” amp. I particularly enjoyed taking it out to the forest and blasting wildlife from atop a boulder a la Ted Nugent (but no loincloth, alas).

● The compact wireless transmitter plugs into most guitar output jacks and features a built-in rechargeable lithium-ion battery.
● The transmitter can be charged from the amp’s transmitter port, via the amp’s USB jack or with an external USB charger.
● The amp provides five different amp types and a selection of 58 different boost, modulation, delay, reverb and other effects.
● The free Boss Katana-Air app enables users to program and save patches, access more advanced parameters and download patches from the Boss Tone Central library.
● THE BOTTOM LINE Offering guitarists the utmost in playing freedom, the wireless, compact Boss Katana-Air is truly liberating from a tone creation perspective as well as practice, recording and performance perspectives.