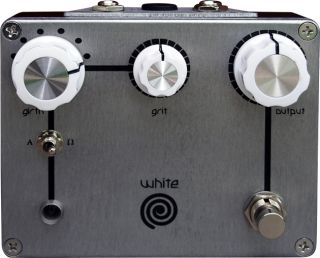 Spiral Electric FX, the company founded by former DigiTech/DOD mastermind Tom Cram, has announced the White Spiral Boost, touted as a light JFET boost designed to serve as either an “always on” effect providing increased harmonic content with a touch of grit or as a last-in-chain boost to drive an amp’s dirty channel.

The new pedal boasts controls for output, “Grit” and “Girth,” the last of which alternately restricts or increases bass level. There’s also an Alpha/Omega toggle switch which allows the user to switch the positions of the Girth and Grit effects.

The White Spiral Boost follows the release of the Yellow Spiral Drive in March.