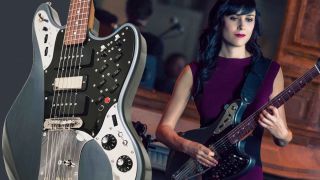 Noveller, aka Sarah Lipstate, is one of the most creative electric guitar players of the 21st century, utilizing a boatload of effects pedals to produce mind-bending ambient textures that most synth players would kill for - and she does it all live, too.

Trust Lipstate, then, to do things a little differently when it comes to guitars: recently, the bow-keen six-string luminary shared a shot of a custom BilT model she had recently acquired, featuring a bewildering array of controls - 22, by our count.

Needless to say, we simply had to catch up with Lipstate - who has been playing the guitar during her recent run of dates with punk legend Iggy Pop - to find out how exactly this model came about.

“When BilT approached me about building me a guitar, I wanted to make the most of the opportunity and create a truly special instrument,” she explains.

“The standard model Relevator comes with an analog delay and analog fuzz onboard. My friend Andy told me to check out the custom Relevator that BilT made for the Old Blood Noise Endeavors Booth at NAMM. It had two Dark Star Pad Reverbs built-in and was super-sinister looking.

“I have a Dark Star at home and the thought of having access to all of its different modes and controls at my fingertips got me really excited. I decided to go with the Dark Star and analog fuzz with oscillation for my Relevator.”

Teaming the Dark Star, which boasts a reverb modulated by pitch, delay and bit-crusher, with an unusual pickup combination of a Lollar P-90/Firebird mini-humbucker/P-90, the Relevator outputs an astonishing array of sounds that are only augmented by Lipstate’s convention-busting pedalboards.

“It’s really fun to start my signal chain with reverb,” she explains.

“I love the textures I get by running the delay mode of the Dark Star reverb through my Klon Centaur and Smallsound Bigsound Mini. It also works well running into the Empress Zoia.

“I like to dial the Dark Star mix to max to blend out the attack and then send that through a dual 8-second delay on the Zoia. The soundscape basically builds itself.

“I also have absolutely no qualms using the Meris Mercury 7 and Chase Bliss Audio Mood with the Dark Star. When I’m bowing my guitar I find that having the built-in reverb helps shape the attack of the bowed guitar and mellow some of the unpleasant high frequencies.

“I use the reverb channel on the Mood set to a long decay for sustain and then the Octave pitch vector on the Meris to fill out the low end. To my ears, it sounds incredible.”

Naturally, there was a learning curve to mastering the instrument - there’s a little bit more to play with than just a volume and a three-way selector…

“It definitely took a couple of days to figure out what parameter is controlled by which knob,” Lipstate laughs.

“BilT sent me a handwritten sheet outlining all the functions but they got some of the controls for the built-in Dark Star Reverb switched so that was extra confusing! Luckily, it’s pretty easy to tell the difference by ear between the two Dark Star modes: delay and pitch.”

The new model also landed at what for many artists would be a career high point: performing on The Tonight Show with Iggy Pop. No pressure, then.

“I played the Relevator for the first time on my television debut,” Lipstate reveals.

“We performed James Bond, one of the straightforward tracks off the new album [Free], so the built-in effects were bypassed and I just played through the Klon and some spring reverb.

“I’ll be using all the features of the Relevator on my upcoming performances with Iggy where we get to play the full album.”

UK audiences can see the band do just that when they play London’s Barbican Centre on November 21 2019.

Until then, we’d recommend exploring Noveller’s otherworldly soundscapes further in our guide to 10 forward-thinking players who are taking the guitar into new realms.