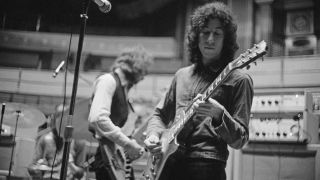 While this lesson could be titled 'How to play guitar like Peter Green', such a promise is largely unfulfillable. The subtleties of Peter's exquisite phrasing are renowned, and were praised by none other than BB King, who said they gave him “chills”.

Nevertheless, there is actually no reason why we can’t learn a great deal from listening and emulating, hopefully imbuing our own playing with a little extra class and panache along the way.

Rather than sitting down to practice alternate picking or learn exotic scales and arpeggios, this lesson is all about the phrasing - which is no less sophisticated but requires a more cerebral approach.

Peter always makes each and every note count, giving the impression that he is always fully conscious of what he is playing, as opposed to reeling off licks and adding vibrato by default on held notes. You get the idea!

This doesn’t mean he won’t add flurries of notes now and again; it’s just that these are most often the way he would begin or end a phrase, almost like a sax player. You can certainly hear how Gary Moore, to whom Peter was a significant mentor, took this approach further when playing pentatonic runs across the strings.

Having steered the conversation away from the technical side of playing, you’ll find that a lot of the details it’s so easy to take for granted as a listener are where the hardest work will be needed: when (and when not) to add vibrato; quarter-tone bends, long slow bends and pre-bends all need to be as perfectly pitched as possible; and occasional staccato hits and triplets sometimes purposefully pull back against the tempo, too. I’ll get more into all that as we look at each specific example.

As you can see, there are no long complicated runs to learn, but there is plenty to work on in terms of phrasing, vibrato, pitching of string bends, and so on.

Watch for the contrasting staccato and held notes – all the things that make this kind of playing interesting to listen to but might escape the attention of the casual listener. In other words, the devil is in the detail!

This example showcases the importance of the quarter-tone bends in this style. If in doubt, try this phrase without them. It loses so much and that alone exemplifies how important the apparently small details are.

Also, try pulling back with the tempo of the phrasing - not enough to be out of time, but see how far you can go before that happens. The results will surprise you!

Picking up the pace a little, we’re starting to deviate from the theme that was developing in the first part of the solo and stretching out a bit. As per the previous examples, stay conscious of the small details: there are lots of little staccato hits, slow and fast bends, plus a cheeky little semiquaver with a quarter-tone bend in bar 3!

This is probably the most demanding example here from a technical standpoint.The initial semiquaver run across the strings needs to be treated merely as a precursor to the held bend in the next bar.

Try pulling back on the tempo selectively during this phrase to make it more expressive. The final note is a pre-bend; these can be tricky, but practice makes perfect.

To finish off the solo, this phrase recaps a few of the melodic and rhythmic elements before landing on the root note in the final bar.As with the previous examples, keep an eye on the details.

Though this may not be technically difficult in the traditional sense, there is a real skill to delivering these lines in a way that sounds compelling.