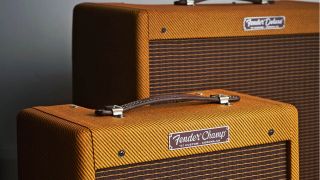 Guest writer Dan Coggins brings us up to speed on some of the fundamental differences between guitar amp class types.

An electronics engineer by profession, Dan Coggins began his career in the music industry during the mid-90s as the circuit designer for stompbox legends Lovetone, before branching out independently with Dinosaural in the early 2000s.

“If you have a valve amp, your preamp valves will almost certainly be operating in Class A mode, which means they are running at their optimum ‘mid-point’ current without any nasty-sounding ‘crossover distortion’ being produced.

“As the rule rather than the exception in most guitar preamp designs, this relatively simple and cost-effective configuration will likely produce some pleasant-sounding harmonics/distortion – an effect that is regularly exploited in the extreme (think Mesa/Boogies and latter-day Marshalls).

“At the power stage of the amplifier, the output valves, configured in a particular ‘class’ of operation such as Class A, AB, D, and so on, interact with the ‘load’, namely the loudspeaker(s), to chiefly determine the amplifier’s signature sound – along with the speakers’ inherent tone and response.

“Most high-wattage guitar amplifiers utilise the Class AB mode of operation, whereas the least powerful amplifiers tend to operate in Class A, although a mixture of both of these modes of operation is common within the medium power range. There are other classes of amplifier operation, such as Class B, C and D, although Class A and Class AB are by far the most widespread in guitar valve amp applications.

“Class AB operation is where two valves (or multiple pairs) share the signal in overlapping fractions of more than a half-cycle each. This is to reduce heat wastage and optimise power efficiency – hence why this configuration is almost always used in the higher-power designs.

“The degree to which the two halves of the signal overlap and the resulting tonal variation is determined by the amp’s ‘fine’ bias setting. Fixed-bias Class AB valve designs such as most Marshalls, Hiwatts and black-panel Fenders generally have a tauter, wider bandwidth and a more controlled sound.

“A well-known example of a small Class A amp is the Fender Champ, which uses just one output valve (known as single-ended operation) and is, by definition, Class A because the output valve must conduct for the whole signal cycle.

“It also operates in what is commonly known as ‘auto bias’ or, more precisely, ‘cathode bias’. Such biasing often uses a large capacitor to smooth out the variations in current, giving a ‘spongey’ attack response, which imparts a dynamic, compressor-like character to the sonic envelope.

“This feature produces the characteristic ‘chime’ of a Fender Tweed Deluxe or a Vox AC30, both of which run in (or very close to!) Class A operation.

“These classic amps use pairs of output valves where each half of the signal cycle is handled by different/opposing complementary valves in a ‘push-pull’ operation for greater efficiency and less even-harmonic distortion.

“Crucially, however, neither of the two designs use negative feedback around the output stage, and therefore the remaining harmonics generated in the output valves are not as suppressed. In designs with feedback, say, black-panel and silver-panel Fenders and Marshalls, a more audible colouration is apparent.

“Presence controls, when fitted, usually ‘burn off’ some of this feedback in the high mid-treble frequencies only to add sparkle (and sometimes a bit of noise and hiss) while maintaining a controlled lower midrange and relatively firm bass response.

“When pushed far enough, the feedback mechanism rapidly gives way and the resulting breakup becomes a defining factor in the sound as it begins to dominate.

“This creates a ‘dynamic equilibrium’ with the output valves, meaning the speakers and the output valves interact to a far greater degree than if feedback were employed. The net result is a complex and intriguing tone that has both a rich harmonic content and an ability to project sound with great immediacy."

This compact, all-tube, switchable, two-channel guitar preamp is designed for use on stage or, with its low impedance, transformer-balanced output, in the studio. The clean channel replicates a black-panel Fender design, while the overdrive channel is based on the tube circuitry of Dumble amps.

Audio Kitchen’s The Small Trees is an all-valve Class A clean boost, providing up to 16dB of full-range clean boost with a Class A valve line driver buffer at the output. Based upon their classic The Big Trees 2.5W-amp clean front-end, the tonal signature is transparent yet distinctively ‘tube-y’.

The Kingsley Page DS V2 pedal is a Dumble ODS-style preamp designed for real tube overdrive tones that will increase in sustain when pushed in level by a clean preamp. This latest version features enhanced EQ options, including three-way Lows and Mode switches in addition to the Tone control.