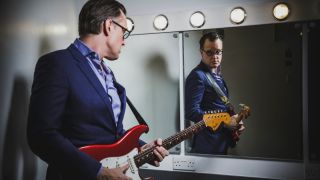 There are plenty of tools out there to help you get the most out of your practice routine. Metronomes, backing tracks, hand exercisers, illuminated fretboards. Scale pattern stickers, books, DVDs ... You get the idea.

But there's one particularly useful practice tool that will dramatically increase your shredding skills while simultaneously helping you to nail those all-important rock star shapes when you hit the stage. And the surprising thing is, you already have it.

What is it? A mirror.

We've all rocked out in front of a mirror with a guitar. Hell, most of us probably started playing in the first place after jamming out on a tennis racket in the mirror to Kiss or Metallica and thinking "this is actually pretty cool..." But aside from helping you to zero in on that perfect James Hetfield slow-slung slouch, a mirror can help you to perfect your technique, and probably even help to prevent serious problems like carpal tunnel syndrome.

There are several areas where a mirror can come in handy (aside from working on the aforementioned stage poses). The first is playing posture. I've taught so many students who started out with bad playing posture that needed to be corrected - they always seem to orient the guitar so that the neck is parallel with the floor, but this contorts their fretting hand into a weird position that makes it hard to change chord shapes, and especially hard to nail that dreaded open-position F major chord.

Here's how a mirror can help: with your guitar at your side or otherwise out of the way, hold up your fretting hand. Look at the angle created by your knuckles, then place the guitar neck into your hand parallel to that angle, rather than forcing your hand to conform to the angle of the guitar.

This immediately makes it much easier to play, and it virtually eliminates stress on your wrist. You'll shred faster. You'll fret more efficiently. You'll get the girl/boy.

Another great way that a mirror can help your playing is by letting you see if your vibrato is even. Stringed instruments involve a very direct physical connection between player and string compared to, say, piano, where you never actually touch the string (unless you're Eddie Van Halen violating Marvin Hamlisch's piano on Strung Out from Balance). And one very handy result of this direct interaction is that you can tell a lot about what you'll ultimately hear by the way it looks.

Because vibrato is created by bending and releasing the string rhythmically, you can use a mirror to check if you're bending up by the same distance each time, and whether each bend-and-release sequence is as evenly-timed as the one before it. If it looks right, it will sound right.

Muscle memory is a wonderful thing, and once your eyes have taught your hands how to bend the string by even amounts, they'll never forget.

And finally, mirrors help you to stop looking directly down, which will help you to become a better performer onstage. Unless you're in a shoegaze band. Then maybe you should just wear shoes you can see your reflection in.

Peter Hodgson is a journalist, an award-winning shredder, an instructional columnist, a guitar teacher, a guitar repair guy, a dad and an extremely amateur barista. In his spare time he runs a blog, I Heart Guitar, which allows him to publicly geek out over his obsessions. Peter is from Melbourne, Australia, where he writes for various magazines, including Guitar World.