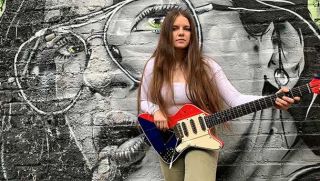 Up until now, Brian May Guitars has exclusively built, well, Brian May’s guitar (that would be the Red Special and its variations, including mini and acoustic versions).

But now BMG has crafted its first electric guitar for another player - the Arielle, built for, well, Arielle.

The new model was co-designed by Arielle - a singer-songwriter and guitarist from Austin, Texas - and May, and is based on the handmade Two-Tone guitar (“I call it that because it has two tone knobs,” she says) that she built at 16 years old.

Explaining the Two Tone’s origins, Arielle says in the video below that she was initially inspired by May, “who built his famous Red Special when he was 16 with his dad.”

To create the Two Tone’s unique look and sound, Arielle took inspiration from the four guitars she owned at the time—the ebony fretboard and blue finish from her Manhattan Midnight Les Paul, the long scale length and reverse headstock from her B.C Rich Warlock, the pickup selectors and phase switch from her Red Special and the Fender tremolo and bridge system from her Squier Jagmaster.

“It inspires me every time I pick it up,” she says.

Though Arielle may not be a household name just yet, she comes to this collaboration with plenty of pedigree, having opened and performed with the likes of Gregg Allman, May, Joe Bonamassa, Eric Johnson and more. In 2008, May personally hired her as a guitar player in the West End London production of We Will Rock You.

She also recently completed a two-month headlining tour of the US, as well as released her eighth effort, Suspension/Dimension.

Coming up is Eric Clapton’s Crossroads Festival in Dallas, where Arielle will perform on September 21.

May has heaped praise on Arielle as well, saying, “That small body holds an amazingly big heart and amazingly mature passion. Her musicianship is a clear indication she has been here before! Pass her by at your peril."

The Arielle signature model is scheduled for release in 2020. For updates, keep an eye on Brian May Guitars.