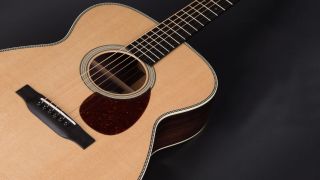 Collings has introduced the 00 14-Fret Series, featuring a new acoustic guitar body size that “finds the sweet spot between a small-bodied and mid-sized instrument while bringing to the table a distinctive voice and character all its own.”

The guitars feature a shorter 24 7/8” scale length and a relatively broad waist, which Collings says allows for delicate top-voicing and more openness, as well as midrange resonance and low-end definition.

The line is comprised of four models – the 001 and 002H, as well as the Traditional Series 001 T and 002H T, which boast woods selected by master luthiers and joined together using animal protein glue.

Finish is a high-gloss nitrocellulose lacquer (extra thin on the T models).

For more information, head to Collings.