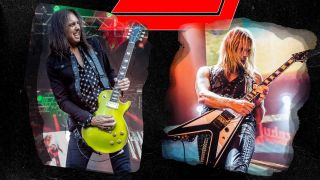 Damon Johnson will headline A Tribute to Thin Lizzy, a live event taking place on September 25 at 7 PM CST from Nashville.

Johnson, who has played guitar in recent iterations of Thin Lizzy, will be joined by his current band the Get Ready, as well as Judas Priest electric guitar player Richie Faulkner, for the show.

In addition to Lizzy tunes, Johnson will be debuting the title track from his upcoming solo album, Battle Lessons, at the end of the show. The new track will be available on all streaming/download platforms the same day, and he has an Indiegogo fundraiser running to help support the recording.

Battle Lessons was produced and mixed by Nick Raskulinecz (Foo Fighters, Alice in Chains) and is due out later this year.

“I’m beyond thrilled to have my old friend Richie Faulkner join us on guitar as we pay tribute to Phil Lynott and Thin Lizzy, a band that has meant so much to all of us for so long,” Johnson said. “Plus we’re going to perform our new single for the first time anywhere.”

Added Faulkner, “Damon is a good friend of mine and Thin Lizzy is part of my DNA as a guitar player, so it was an honor to be asked to rock some Lizzy classics with him and the Get Ready.“

To purchase tickets, head to DamonJohnson.com.