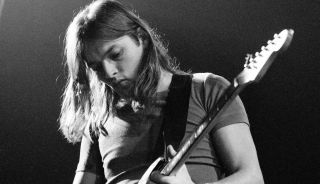 David Gilmour has revealed that he was one of the people behind the boards during Jimi Hendrix's legendary performance at the Isle of Wight Festival in 1970.

In a recent interview with Prog magazine, the Pink Floyd guitarist detailed the hitherto unknown role he played in the set.

“I helped mix the sound for Hendrix at the Isle of Wight in 1970," Gilmour said. "Not a lot of people know that.

"I went down to go to it and I was camping in a tent, just being a punter," he continued. "I went backstage where our main roadie guy, Peter Watts, was trying to deal with all the mayhem, with Charlie Watkins of WEM.

"They were very nervous; they were going to have to mix Hendrix’s sound. I did some mixing stuff in those days and they said ‘Help! Help!’ so I did.”

You can read Gilmour's full conversation with Prog in the magazine's new issue, which is on sale now.