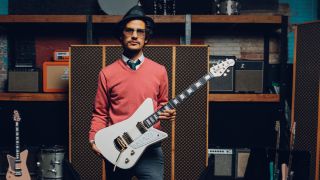 After its surprise appearance at the UK Guitar Show, the Mariposa has now officially been unveiled by Ernie Ball Music Man.

The signature electric guitar for At The Drive-In/Mars Volta guitarist Omar Rodríguez-López, the Mariposa is most notable for its distinctive angular look, which is accompanied by an ornate laser-etched pickguard.

It offers pickups custom-designed to handle bucketloads of distortion while still packing classic humbucker sounds, with individual volume controls for each pickup - there’s no tone control here, but rolling back the volume will also tame the high-end.

The new guitar appears to take its cues from the St Vincent and Albert Lee HH models, which Rodríguez-López had been playing on At The Drive-In’s recent tours.