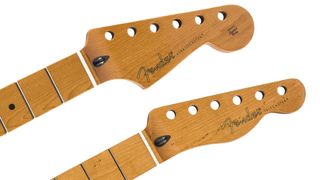 Roasted maple is rapidly becoming the neck wood du jour for hip boutique electric guitar builders, and now Fender has got in on the act by offering official roasted maple Stratocaster and Telecaster necks for sale from its online store.

The maple fingerboard and headstock face receive a gloss urethane finish, while the back of the neck gets a position shift-friendly satin finish.

Roasted maple necks are purported to be more resistant to humidity shifts owing to the removal of moisture at the roasting stage. Plus, their darker hues look more appealing than plain maple, which can sometimes appear somewhat anaemic.

Fender is also claiming its roasted offerings deliver “more sustain”, but we’re not quite sure we buy that.

To our recollection, the first time Fender offered roasted maple necks was on its FSR Roasted Ash models back in October 2017, but the spec has since appeared on this year’s Alternate Reality Powercaster and a number of retailer-exclusive limited runs.

The appearance of roasted maple on the Big F’s online store indicates to us that it’s likely to feature on the company’s next major line-up launch, or any additions to existing ranges.

What that will be, we have no idea, but we’d wager we’re in line for a major roasting.

For now, you can snap up a roasted maple neck for $299 from Fender.com.