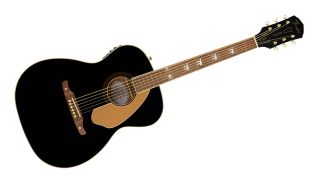 Best known as the frontman, guitarist and founder of American punk powerhouse Rancid, Armstrong's influence in the scene can't be overstated.

The new signature guitar is composed of a solid spruce top and mahogany back and sides - finished in a rather sleek gloss black - and built to be a faithful recreation of Armstrong's own instrument, which traces back to the '60s.

“The Tim Armstrong Anniversary Hellcat is the culmination of a decade of great work with Fender,” Armstrong says.

“This model is very loyal to the original guitar I’ve had since I was a teenager and it played a starring role in many of my albums, shows and songwriting sessions. I can’t wait to see what it can do and inspire in the hands of other players around the world.”

The Fender Tim Armstrong Anniversary Hellcat is available now for $449/£429/€469. For more information, head to Fender.