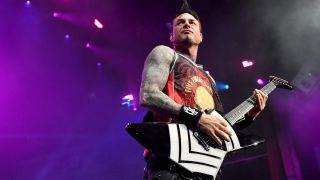 But in a recent interview, Hook, who is currently sitting out Five Finger Death Punch’s European tour with Megadeth and Bad Wolves to recover from gall bladder surgery, hinted that he’s been, um, exploring the possibility of designing a seven-string guitar with Kiesel.

"I've got something coming that has never been done before,” he told Ultimate Guitar. “I had a prototype made of this idea and it worked amazing. So I'm talking to Kiesel Guitars and they're going to start prototyping as soon as I get back."

"Seven-strings are really difficult to play. I can't say I particularly love the seven-string even though I do use them because I have to cover some high lead tones as well as some baritone rhythms.

"So I came up with a design that should work for both, and Kiesel is going to make it, and I can't talk about it beyond that, really. I'm really excited."

Regarding his six-strings, he said, "Basically, my signature Explorer is my go-to. I've customized a few of them. I put a Boss pedal in one of them.

"I cut a hole in it and put a pitch transposer pedal – they don't make the pedal anymore. I think it's called the PS-5, the Super Shifter is what it's called. But I hardwired it into the signal chain within the guitar so that I could have a whammy bar effect on a guitar that does not have a whammy bar.

"So I can do dive bombs and stuff like that. It's got a mode on it called Tremolo Arm if you can believe that. I thought, This is interesting. If I put this in my guitar, I can actually have a tremolo arm without a tremolo. So it's kind of how I came up with the idea."

Hook went on to discuss other mods to his GIbsons.

“I scoop all of the wood away from the high frets; otherwise, I can't get to them,” he said.

"So they fill the hole with rock maple because it's really dense and hard. Then they build two or three more frets on there, so essentially I have a 24-fret Gibson Explorer, which doesn't exist."