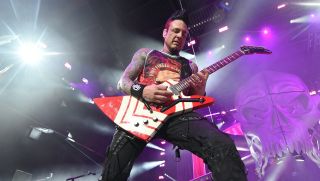 Back in December, Five Finger Death Punch canceled a series of dates on their U.S. headlining tour in order for guitarist Jason Hook to undergo emergency surgery to remove his gall bladder.

Now the electric guitar player has opted to sit out the rest of the band’s current European run with Megadeth and Bad Wolves in order to have additional time to recover. He’ll be replaced by UK shredder Andy James for the remaining dates.

The band announced the news in a social media post prior to their February 4 show in Hamburg, Germany.

"Hamburg Knuckleheads,” the band wrote, “due to unforeseen circumstances, our brother Jason Hook will not be able to perform tonight. He needs additional time for his recovery and must step back from the current tour in order to have the opportunity to do so. We discussed this as a band and Jason's well-being is our priority – health comes first.

"It was Jason's express wish that we continue the tour so with Jason's blessing we have invited our friend Andy James who has agreed to step in and finish the tour for Jason.

"We are grateful for Andy stepping up and will continue to deliver the great show the fans deserve every night.

“We've been having an incredible run with our friends in Megadeth and Bad Wolves so far, and the vibe of the tour has been amazing. We look forward to seeing all the German fans next and appreciate all of you joining us in wishing Jason a speedy recovery.”

As some of you may have heard I have been asked by @5fdp to come and fill in for Jason Hook as he heads home to better health as they finish their European tour. I’ll do my best to help maintain the high level of show these guys smash out every night and do the material justice not just from a professional standpoint but also being a huge fan of the band! I’d like to thank @ivanmoody @zoltanbathory @5fdpchriskael @charlieengen and their amazing crew for making me feel very welcome as we complete the rest of the European shows for all you knuckleheads out there that wanna come and throw down🤘🏻🤘🏻AJ Photo credit @wombatfire Official Andy James

At a recent London tour stop Megadeth’s Dave Mustaine took time during his band’s set to address his battle with throat cancer, telling the audience that he is “100 percent” cancer-free."