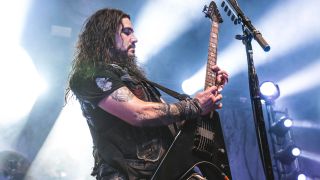 In today's digital age, it's seemingly easier than ever for artists to put out material with greater regularity. The biggest names in the world of guitar seem to be releasing albums and singles left, right and center - and we've never been happier.

In the past week alone, we've been treated to plenty of fantastic new music. From Code Orange's industrial, synth-infused Swallowing the Rabbit Whole to Stone Temple Pilots' shift from amps to nylon strings, there's been an abundance of both electric and acoustic guitar mastery to admire.

We've put together what we think are the most essential tracks from the last week. If there's any you feel we've missed, rest assured: they were considered.

While we lie in wait for the new Deftones album, Liverpool’s brightest metal upstarts are here to fill the void with one I Let It In And It Took Everything, one of 2020’s best albums thus far.

But while the band’s cannonballing baritone riffs and dream-like vocals recall Sacramento's finest, their breakdowns owe more to djent and metalcore, lending a sharper edge to their already well-honed craft. Ignore this band at your peril. (MAB)

Green Day - Meet Me on the Roof

Pop-rock's most arguably influential trio returned last week with Father of All Motherfuckers, an upbeat, infectiously feel-good 10-track record which clocks in at a mere 26 minutes and 16 seconds.

Steering away from the politically charged themes of albums past (think American Idiot), the album brings a welcome dose of escapist positivity to our increasingly uncertain political climate.

Still, the opening guitar riff of Meet Me on the Roof, while simple, harks back to the Green Day of the 2000s, beautifully utilizing nostalgia to drive home those evocative pop-punk hooks. (SR)

The modern-age disciples of thrash metal are back with their first album in five years, Cycle of Suffering. Having taken time out to tour and record with British metalcore frontrunners Architects, guitarist and frontman Josh Middleton returns to Sylosis with renewed vigor.

The album opens with Empty Prophets, which hits like a freight train, setting the stage for the rest of the album with a rapid-fire opening riff that locks in tightly with the machine gun-esque drum work. The section is followed by a pounding half-speed riff that's certain to get your head moving, followed by an impressive harmonized solo section. To a guitarist, this track has everything, and we dig it. (SR)

The ’90s alt-rock stalwarts made the surprise move to ditch the amps for their second record with new singer Jeff Gutt - and the results are quite spectacular.

The ever-underrated Dean DeLeo picks up a nylon-string to lend the album’s title track a distinctly cinematic feel, with a nuanced, performance so chock-full of flair, it’s hard to believe this is the band’s first all-acoustic affair. (MAB)

The lauded YouTube tutor, PRS endorsee and former GW columnist unveiled his debut EP this week, with a series of videos on his Music Is Win channel. Entitled Nashville Noises, the release showcases five original songs recorded in five different studios in Nashville, with guest appearances from the likes of Adam Neely and Andy Wood.

Eighty-Nine starts in pure fusion territory, balancing funky rhythms with gnarly fuzz tones, before Larson and special guest Tomo Fujita exchange licks over a backing track that recalls ballads by the likes of Joe Satriani - who himself is one of Larson’s all-time heroes. (MAB)

You'd be forgiven for assuming straight off the bat that Code Orange's Swallowing the Rabbit Whole is built on an odd time signature, but this is due to, as the song's music video might suggest, a possible new and unnamed drummer's ability to shift and sway around 4/4.

The track quickly kicks into gear, with a tension-building palm-muted guitar section that couples nicely with the drums, climaxing with one of the most unusual and incredible guitar riffs we've heard in a while.

The rest of the track is an instrumental masterclass, with a particularly standout moment in the breakdown section. Guitar, bass, drums and synth marry together perfectly, seemingly unconfined to any tonal region, creating a beautiful sonic cacophany that's certain to open up the pit. (SR)

Wales’ premier prog-rock-metal outfit returns this year with Inescapable, their most refined effort yet.

In Surrender, the band conjure a desolate, uneasy atmosphere, as time signatures simmer and sway, and arpeggiated chords rise and fall, all building towards a climactic wah-drenched lead from six-string-toting frontman Darran Charles - the kind of virtuosic delivery that has also seen him sought after by Bruce Soord-fronted progsters The Pineapple Thief. (MAB)

The longstanding California metal quartet have returned with a new standalone single, Circle the Drain. The track appears to mark a sonic change of direction for the band, with catchy, melodic chorus vocals and an instrumentally stripped-back verse.

But fear not - hardcore fans will not be left wanting, as a Machine Head-signature, natural harmonic-infused riff follows frontman Robb Flynn's "I bring the hammer down" vocal cry. And we can confirm - he certainly does.

Following last year's Do or Die, new guitarist Wacław Kiełtyka comfortably fills the void left in 2018 by long-serving six-stringer Phil Demmel, delivering the pounding riffs with satisfying accuracy and confirming that Machine Head, despite their line-up changes of late, are stronger than ever. (SR)