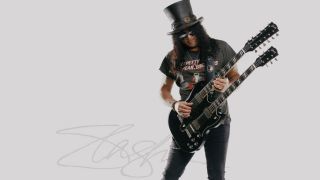 Gibson has announced the Slash 1966 EDS-1275 Doubleneck, a signed and aged electric guitar based on the Guns N’ Roses guitarist’s original.

Promising to be an exact replica of Slash’s Aged Ebony model, the doubleneck is built from one-piece solid lightweight mahogany, and packs a ’66 medium C-shape neck with Indian rosewood fretboard.

Custombucker Alnico III humbuckers handle the tones, while the nitrocellulose lacquer-finished body is worn to replicate the top-hatted one’s electric, including some pretty heavy buckle rash on the rear.

Slash bought his original doubleneck from a small music store in Indiana in 1990, following which it saw heavy rotation during Guns N’ Roses’ Use Your Illusion tour on the tracks Only Women Bleed, Knockin’ On Heaven’s Door and Patience.

Just 125 editions of the replica be produced, with each hand-signed and numbered by Slash, and accompanied by a vintage replica hardshell case, custom Slash concho guitar strap and Certificate of Authenticity.

The price for this one is an eye-watering $13,299 - even that’s higher than the Gibson Global Brand Ambassador's ‘Brazilian Dream’ Les Paul, which clocked in at $12,999 last year.

Head over to Gibson if you fancy drooling some more over this unobtainium.