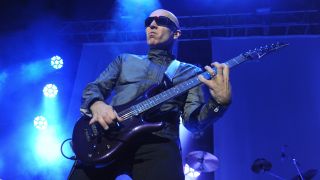 Now Joe Satriani has revealed that he, too, has a pair of records in the works.

While Satch’s latest album, Shapeshifting, just came out in April, the guitarist recently told Australian Musician: "I got it in my head that I wanted to create two separate records in the next few months. One would be another instrumental album, and another would be a vocal-oriented record. But they would be centered around my live band.”

As for why he has decided to split the albums up in that manner, Satriani continued, “The unusual nature of that was because the band is so unique, with Kenny Aronoff on drums and Bryan Beller on bass guitar, and an Australian phenomenal musician Rai Thistlethwayte on keyboards and guitar, who's also a fantastic singer."

Satch also admitted that had the coronavirus pandemic not occurred, these record would probably not be happening.

“If things had gone along normally we would have stuck on a tour bus somewhere in Europe. We would have been playing two-and-a-half hours of music every night and licking our wounds in the morning,” he said.

Instead, “The tour’s been put on hold, but the band and I have been texting each other music almost every day.

“And so we’re all on board thinking that remotely we’re going to build these records over the next couple of months. So that’s what we’re doing with this time at home - we’re trying to be as creative as possible.”