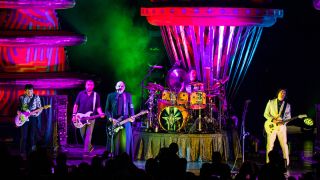 In the video chat, the first episode in Yamaha’s new On the Bench | Artist Check-in series, Schroeder tells Yamaha Senior Guitar Designer and Luthier Pat Campolattano that while 2020 was slated to be a “semi-busy” year for the Pumpkins, including festival dates and a run with Guns N’ Roses, he’s still staying occupied.

“Although I’m a musician and being onstage is one of the greatest things we get to do I’m still lucky I get to be productive,” Schroeder says, adding that he’s “just been hanging out and using the time to practice a lot of guitar, a ton of guitar actually, and write a lot of music and record.”

Apparently, so has Pumpkins leader Billy Corgan, who Schroeder reveals is working on not only a double album due this year, but another new record on top of that.

“Billy has already started working on another new album,” Schroeder says. “We have actually 20 news songs coming out this year that we just finished kind of right before this all started. He’s taking the time to get the ball rolling on even another new album.

“So once we can all get together and work on that we’ll try to even do some more music since there’s some time.”

We would imagine that when that time comes, Schroeder will call on his tricked out Yamaha Pacifica to assist him on the guitar parts.

The guitar, which he can be seen holding during the interview, features custom appointments like a thin maple neck with carbon fiber stripes embedded underneath the 24-fret fingerboard, a Floyd Rose Original Hot Rod tremolo and a Sustainiac pickup.

“I’m beyond thrilled with my Yamaha Pacifica. We packed a lot into this guitar and there are no compromises anywhere. The craftsmanship is of the highest level. It’s absolutely one of the best guitars I’ve played in my life. I can’t put it down. My deepest thanks to everyone at Yamaha for making my dream guitar a reality.” @smashingpumpkins and @nightdreamer guitarist @jjjschroeder on the @thenammshow booth with his Custom Pacifica. Swipe to see it in action, in a live @nightdreamer performance of “Another Life” Yamaha Guitars

There are also custom Seymour Duncan Hunter humbuckers, which Schroeder chose because, he says, “I’ve always really loved George Lynch’s tone on [Dokken’s] Under Lock and Key album, and I think that’s kind of the era of [this] pickup.”

Additionally, the guitar is finished in a striking bright red, which Schroeder admits doesn’t quite come across in the video. “You don’t really get what this guitar actually looks like,” he says. “I mean, you can see it in the dark.”

The Pacifica, Schroeder says, “does everything that I could ever want. It looks great, sounds great, plays amazing.”

“I basically sleep with this guitar,” he says.”

This model is in addition to another, unidentified Yamaha design that both Schroeder and fellow Pumpkin James Iha were road-testing last year.

Yamaha's next On The Bench live stream takes place with Rival Sons' Scott Holiday at 10am PST / 6pm BST / 7pm CEST, where he will be discussing his custom Revstar.

Stay tuned to Yamaha for updates.