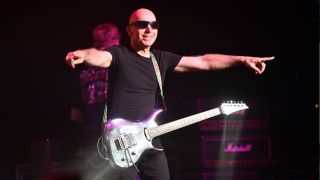 Joe Satriani has been on a roll lately as far as telling us all about his musical low points.

Last month the electric guitar player revealed the one solo he regretted writing and recording, and now Satch has named his least favorite of all his albums.

“My first EP [Joe Satriani], back in ’84,” he tells Classic Rock in a new interview. “No bass, drums, keyboards. Just guitar, wrapping the pickups in foil and tapping them with an Allen wrench to get kick drum sounds.

“Some of the music’s sweet, and I love that it was avant-garde, but I have no idea why I thought people would want to hear that!”

As for his best album? The just-released-this-month Shapeshifting, of course.

“As the memory of recording Shapeshifting fades, I can hear it as a listener, not a musician on the inside looking out,” he explains.

“I’m working out all the parts for the tour and surprising myself with all the things we did. I’m very excited about the variety of music and guitar styles."

When it comes to his favorite non-Satch album, meanwhile, Joe nods to one of his biggest influences, Jimi Hendrix.

“Electric Ladyland, for the breadth of the material, for how groundbreaking it was,” he says.

“What a wonderful invitation from Jimi into all the different facets of his creativity. 1983… (A Merman I Should Turn To Be)? Nobody was making those sounds!”