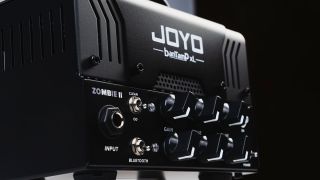 Joyo has announced the latest lunchbox guitar amp in its upgraded Bantamp-XL series, the Zombie II.

Like the recently launched Jackman II, the Zombie II adds two footswitchable channels (clean and gain), with separate EQ, gain and volume for each - a footswitch is included, too.

You also get onboard Bluetooth for jamming along to tracks, plus an FX loop and headphone output, in addition to the high-gain American-voiced tones.

The Zombie II is available now for $189 - see Joyo Audio for more info.