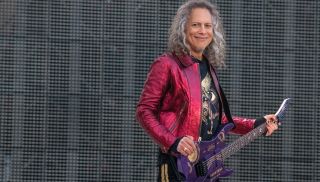 Kirk Hammett has long professed his love of the wah wah pedal – so much so that he used three (!) of them together on Metallica’s Hardwired.

But now his wah supremacy is being challenged, and the electric guitar player throwing down the gauntlet is none other than Mrs. Smith, who Guitar World once called the love child of Dame Edna and Yngwie Malmsteen.

“I abuse the wah more than Kirk Hammett and I’ve challenged him multiple times to a wah-off. No response.

“Why are you hiding behind your wah-wah pedal, Kirk Hammett?”

‪KIRK HAMMETT VS. MRS. SMITH‬ ‪CRY BABY BATTLE ROYALE‬ ‪March 8 at The Senate in Columbia, SC‬ ‪ ‬ ‪Who would dare challenge the status of @KirkHammett as King of the Cry Baby Wah Pedal? His reign has long been undisputed and recognized by millions of fans the world over, not to mention Wah manufacturers, @jimdunlopusa, who feature a Kirk Hammett Signature model. Last year, the gauntlet was thrown down by a most unlikely challenger... Mrs. Smith! New York City-based philanthropist, emerging guitar goddess, and lover of all cats (as well as some people), @smithcatmrs has dared to proclaim that she is, in fact, the #1 Abuser of the Wah. Kirk has accepted her challenge, and now these two will finally go head to head (foot to foot?) in a Cry Baby Battle Royale for the ages on March 8th at The Senate in Columbia, SC! Get tickets for this once in a lifetime showdown now! LINK IN KIRK’S BIO #CryBabyBattleRoyale #WAHOFF #kirkhammett #smithcatmrs‬ Metallica

Well, Hammett is hiding no more. The Metallica man has now accepted Mrs. Smith’s challenge, and the two will go head to head – or, as the ad puts it, “foot to foot,” in a Cry Baby Battle Royale.

The filter fireworks happen March 8 at the Senate in Columbia, South Carolina. And to make the whole thing even weirder, Hammett’s Wedding Band covers project, with Robert Trujillo, Whitfield Crane and others, will be performing as well.

For more information or to purchase tickets, head here.