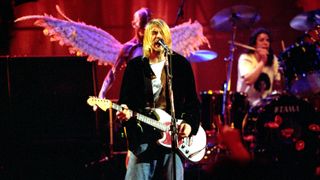 It has already been a banner year for electric guitar auctions, and we can add another impressive sale to the pile: Kurt Cobain’s 1993 custom Fender Mustang, which just went for a whopping $340,000.

The guitar, finished in sky blue and accented by a red mottled pickguard, was sold as part of Julien’s Auctions two-day Icons & Idols: Rock ‘N’ Roll event on October 24 and 25. Cobain used the Mustang on Nirvana’s In Utero tour in 1993.

Also on the block was the tattered olive-green cardigan the Nirvana front man famously wore for the band’s MTV Unplugged taping. That item went for $334,000, setting a new world record for the most expensive sweater sold at auction.

Cobain’s Mustang wasn’t the only guitar for sale during the Icons & Idols auction.

Among the other instruments sold was a Chris Cornell-owned and -played Gretsch Duo Jet, which went for $65,625, a Gibson SG owned, signed and played by Ron Wood for $22,400 and a 1988 Guild acoustic from the personal collection of Eric Clapton for $25,600.

For more information on the auction, head to Julien’s.