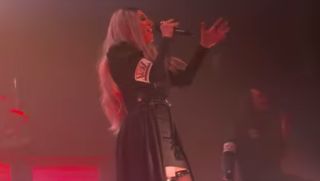 Lacuna Coil have announced a new album, Black Anima, due October 11 via Century Media Records. The effort, the band’s ninth studio album overall, is the follow up to 2016’s Delirium.

Said frontwoman Cristina Scabbia about the new record, "Black Anima is all of us. It's you and it's me. It's everything we hide and fiercely expose to a world that's halfway asleep. It is the fogged mirror we are peering into searching for the truth. It's sacrifice and pain, its justice and fear, its fury and revenge, it's past and future. Human beings in the magnificence of a disturbing ambiguity. The black core that balances it all—as without darkness light would never exist. We proudly present to you our new work and can't wait to welcome you in our embrace. We are the Anima.”

You can view all upcoming tour dates below. To purchase tickets, head here.