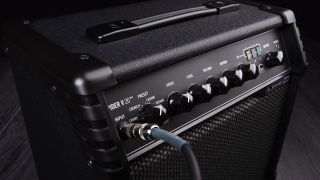 Now the company has announced a new addition to the series, the Spider V 20 MkII, designed for practicing guitarists.

The 20-watt combo is loaded with a custom eight-inch speaker and boasts 16 presets, each with three effects that can be switched in and out, stompbox-style, using the dedicated FX buttons on the front panel.

A Tap/Tuner button allows for tapping in delay times and modulation rates to match songs that the user is playing along with; hold the button down and access the amp’s onboard tuner.

Additionally, more than 200 amps and effects, as well as customization tools, can be accessed through the free Spider V Remote app (just connect the amp to a Mac, PC or mobile device via the Micro USB port).

Guitarists can also record, edit, and mix performances using Steinberg’s Cubase LE, a free download with registration of the amp.