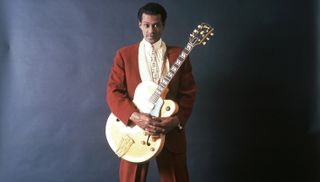 NAMM 2019: In addition to a spat of recently-announced new electrics and acoustics, Gibson has teamed up with Chuck Berry’s son and grandson to recreate Berry’s famed ES-350T. According to the company, Berry’s original guitar was “x-rayed down to the micro-level” in order to craft the new instrument.

This new announcement follows the recently-revealed Chris Cornell Tribute Model ES-335. Features of the Cornell guitar include aged Lollartron humbucking pickups, clear “no number” Top Hat knobs, an Olive Drab Satin finish and a Mother-of-Pearl Chris Cornell ‘signature’ peghead inlay. Only 250 will be available, with a portion of the proceeds going to charities in his name.

For more information, head over to Gibson.com.