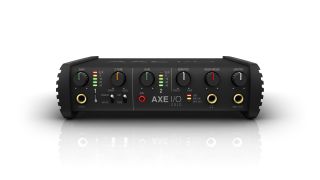 The unit was developed with guitarists looking to record on a budget or on-the-go in mind, featuring 2 inputs and 3 outputs in a portable and convenient form factor.

The AXE I/O SOLO features IK's high-end PURE microphone preamp, an instrument input with proprietary tone-shaping options, an exclusive Amp Out to incorporate real gear into a recording setup, and 24-bit, 192 kHz converters with a wide dynamic range, for pristine recordings in all musical genres. Not bad for a little device...

The unit also has the ability to act as a controller for IK's AmpliTube 4 software, IK's guitar and bass tone studio for Mac/PC/iPhone/iPad, which comes included if purchased. Also included will be a suite of T-RackS mixing & mastering plug-ins and Ableton Live 10 Lite recording software.

If the AXE I/O SOLO didn't have enough features already, it also comes with a streamlined re-amplification setup, offering guitar and bass players the chance to incorporate real amps and pedals without the need for an external conversion box.