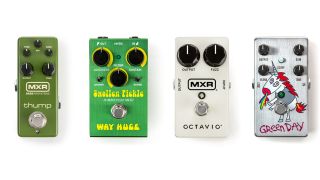 Collaborations between effects giants and newer, more up-and-coming builders have certainly increased in recent times - from the Boss/JHS JB-2 Angry Driver to MXR’s pairing with Paul Cochrane for the mini Timmy, announced just a few days ago. Now Jim Dunlop/MXR have revealed details of their Way Swollen Pickle Jumbo Fuzz partnership, bringing a more affordable option to the market that sacrificed none of that sacred tone.

This new joint venture also sees that famous Way Huge sound repackaged in miniature form - ideal for those conserving space on the pedalboard. It has controls for Loudness, Sustain and Filter to sculpt the right shade of fuzz, also benefitting from switches for Scoop and Crunch switch.

Considering it's an album that could probably be found lying around in any rock fan’s collection, the Dookie Drive has been popular among Green Day diehards and punk rock players in general.

This year, in celebration of the band’s 13th studio album, Jim Dunlop are releasing a special limited-edition third version, featuring the rainbow-spewing unicorn seen on the album art and - most importantly of all - that biting guitar sound that the group have been long-famous for.

One new pedal that will certainly appeal to Hendrix fans will be the Octavio Fuzz, which somewhat surprisingly marks MXR’s first attempt at such a pedal. With just two knobs for Output and Fuzz, it prides itself on a sound that won’t need much tweaking at all.

And last but not least is the mini MXR Thump Bass, which revisits the highly renowned tone of the Echoplex pre-amp for a bass tone that’s guaranteed always cut through with punch and definition. Miniature in size, but the opposite in tone, it’s the kind of sweetener that serves perfectly for a solo-boost or ‘always-on’ sonic staple.