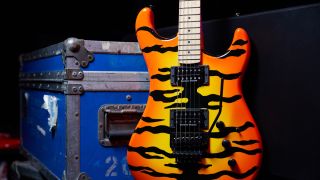 NAMM 2020: Kramer has gone all-in to make 2020 the year of late '80s fretboard pyro, with its Made To Rock Hard collection offering a cornucopia of shreddable electric guitars in a variety of retina-troubling finishes.

Hey, no one looks out the Kramer catalogue and demands subtle. These new 2020 models arrive in three collections: the Custom Graphic Collection, the Original Collection and the Modern Collection. A number of artist collaborations will be announced later in the year.

Already Dave "the Snake" Sabo has collaborated on the Snake-Baretta, a slime-green S-style with a reverse headstock straight out of Mad Max and serpentine graphic. A Tracii Guns collab is in the pipeline, too.

The vibe of these three collections is self-explanatory. The Custom Graphic models will have dial up that hotrodded electric vibe. The Original Collection reprises classic Kramer designs such as the Icon, Baretta, Pacer, Focus, and SM-1, the likes of which might have you experiencing a Ross from Friends moment as you try to squeeze yourself back into your favorite leather pants.

The Modern Collection comprises newly designed models such as the Assault, Striker, Nite-V and more, and is a little more minimalist but no less aggressively appointed, and it sees Kramer build guitars for today's hard rock and metal player.

The Made To Rock Hard Collection will be fully unveiled at Winter NAMM 2020. Kramer says there will be entry-level, intermediate and professional guitars on offer.

Of his collaboration on the Snake-Baretta, Sabo says his connection with the Kramer brand and that guitar goes all the way back to 1985.

"I was working at a music store in Tom’s River, NJ. Rachel Bolan and I were putting Skid Row together, building a following and I was able to get a Kramer factory tour," said Sabo in a statement. "I was blown away at how great the guitars were and how cool the company was. I had an idea for a guitar with a single humbucker in the bridge, one volume and one tone knob, a black Floyd Rose and a killer paint job.

"There was an artist in the area by the name of Dennis Kline that did incredible air brushing. I got him to come up with the snake rising out of a grave. And I was able to convince the people at Kramer to take this idea and put it on a Kramer Baretta and that’s the story of my Kramer Snake guitar. More than 30 years later, my friend Todd Harapiak – now a Gibson TV producer – reached out to me asking if we could do a run of this guitar.

"The attention to detail and adherence to the legacy is profound. I’ve never had a signature guitar, so to say I’m humbled would be an understatement. When I put the Snake guitar away 25 years ago, I never thought it would be resurrected, much less through a Kramer (Gibson) partnership! I’m so proud and grateful to be a part of this and the history this represents. I hope it brings the same amount of joy to guitarists out there as it does to me.”

Prices and specs are TBC. See Kramer for more details.

Check out our NAMM 2020 hub for more gear news.