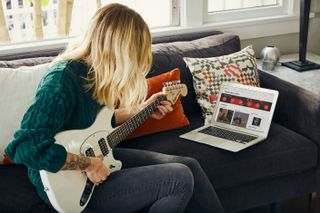 Fender today released a study showing that women account for 50 percent of all beginner and aspirational players, and define the emerging guitar market. Additionally, according to the report, titled “Illuminating the State of Today’s Guitar Players,” both African-American and Hispanic consumers now represent a significant and growing share of new players: African-Americans account for 19 percent of aspirational players, while Latin players make up 25 percent of beginners.

The study, undertaken in conjunction with consultancy firm Egg Strategy and Daniel Levitin, an award-winning neuroscientist, musician, record producer and artist, also found that 72 percent of respondents picked up guitar for the first time to gain a life skill or as a means of self-betterment; that 42 percent of responders said they viewed guitar as part of their identity; and that beginning and aspirational players ranked online, video-based tutorials as the “most-effective resource to learn guitar,” even over private lessons.

According to Fender, the research was commissioned in an effort to better understand the current generation of U.S- and U.K.-based guitar players, their needs, desires and overall lifestyle preferences.

“Today’s players have grown up in a different cultural context and popular music landscape, and rising artists like Mura Masa, Tash Sultana, Youngr, Daniel Caesar, Grimes and Ed Sheeran are changing the way guitar is being used,” said Fender CEO Andy Mooney. “As a brand, we are committed to creating tools—both physical and digital—that this generation of creators needs for self-expression, now and in the future.”

Users can sign up for a 12-month Fender Play subscription for $89.99 per year ($7.50 a month) and get 10 percent off guitars, amps and gear on Fender.com and at participating retailers.

More information on “Illuminating the State of Today’s Guitar Players,” as well as additional findings from the study can be found here.