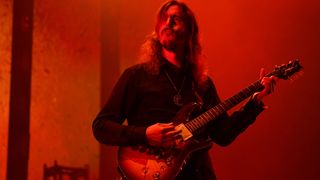 In case you haven’t noticed, here at Guitar World we tend to cover what Joe Bonamassa has to say. But it’s not too often we get to report on what other electric guitar players have to say about Joe Bonamassa.

Enter Opeth frontman Mikael Åkerfeldt, who recently aired his thoughts on the blues titan to Premier Guitar. And he had nice things to offer – sort of.

“Even if I love his guitar playing,” Åkerfeldt opined of JoBo, “I’m not sure how he sounds. I think he’s a product of his influences. So I wouldn’t be able to pick him out of a hundred players. He’s just fucking skilled and has a great tone, great emotion, and all that stuff. He’s also got his influences on his sleeve. He can emulate his idols to the point where he plays their stuff much better than they can.

“But what does Joe Bonamassa sound like? I wouldn’t know.”

When it comes to his favorite guitarists, Åkerfeldt made it clear that for him, it’s still all about the classic hard rock and metal players from his youth.

“It’s the same guys from back in the day,” he said. “There’s some newer players that I think are really good, but many sound the same to me. It goes with metal music in general. I think it’s very same-y. Some of those players are fucking great. I just can’t hear that it’s them. It’s not like Gilmour. You instantly hear it’s him. Ritchie Blackmore, you hear it’s him. Jimmy Page, Michael Schenker, Uli Roth, you hear it’s them.”

He continued: “Then the acoustic players that I really like – I discovered Tommy Emmanuel maybe 10 years ago. He’s fucking fantastic. When you hear him play, it’s like, ‘Wow, I wish I could play like that.’

Finally, Åkerfeldt also cited his fellow countryman, Yngwie Malmsteen. Similar to Bonamassa, he offered mixed praise - as he has done on previous occasions - though for different reasons.

“I still love Yngwie! He’s got his sound and you can hear it right away. Unfortunately, you’re going to hear he wrote the song, too,” Akerfeldt said.

“If he’s reading this, I’m sorry. I love him. I have the utmost respect for him, but he could up his game a lot.”