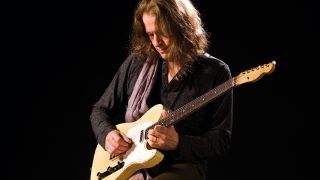 Robben Ford says that he’s been getting a lot of questions about his pedalboard lately, and so the electric guitar great decided to do something about it, putting together a video tour of his impressive range of effects (the ’52 Gold Top in his hands isn’t too shabby, either).

“It hasn’t changed very much in quite some time,” Ford says of his board. “In fact, I might say it hasn’t changed at all, other than the addition of the [Fulltone] Deja Vibe, which I started using maybe a year ago.”

As for what else is on his 'board? The most important pedals, in his estimation, are the TC Electronic Hall of Fame Reverb – “because my amps don’t have reverb” – and the Strymon TimeLine Multidimensional Delay. “I’ve found that the TimeLine is the absolute best-sounding foot-pedal delay you can have,” Ford says.

From there, Ford demonstrates his Electro-Harmonix POG (“It sounds kind of like steel drum”), his Vertex Boost (“it can have a little bit of a bite on top”) and his Hermida Audio Zendrive, which, he says “is still to me the most ‘together sounding’ overdrive. You get to hear all the notes, the full spectrum of the signal.”

Finally, his board is rounded out by a TC Electronic PolyTune, as well as a footswitch to activate overdrive and boost on his Dumble amp – and we all know how much Ford likes Dumble amps.

“That’s basically it,” Ford says. “Sorry I don’t have a more interesting pedalboard.”

Trust us, Robben, you have nothing to apologize for.