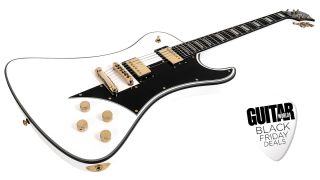 This is easily one of the best deals on a signature electric guitar we’ve seen this Black Friday, even among the bargains offered up by Musician's Friend.

The Fantomen is a collaboration between Hagstrom and fellow Swedes Ghost – who’ve become one of the most popular rock bands of the last decade. The Swedish connection doesn’t end there, with the inclusion of a Lundgren Design No. 2 humbucker in the neck and a Lundgren Design No. 5 in the bridge.

With a price slash of $899.99 to $749.99 – equating to roughly 20% off – this is your chance to own a very modern instrument with classic looks, this exclusive model benefitting from gold hardware against its white finish.

It boasts an elegantly asymmetrical and deceptively lightweight solid-mahogany body with a 25.5” mahogany set neck, a coil split for more tonal options, as well as Hagstrom’s H-Expander truss rod and Resinator fingerboard.

“The first electric guitar I learned to play on was my father’s Hagström Swede that he had in his house for as long as I can remember,” once remarked Ghost mastermind Tobias Forge. “When I was about 7 years old, he taught me Tutti Frutti and Brev Från Kolonien and then I would have to figure out the rest. And I did.”

Now it’s your chance to, as the Ghost frontman so eloquently put it, figure out the rest…

Hagstrom Fantomen Ghost signature: was $899, now $749
Channel your own ghoulish noise through this exclusive gold hardware-equipped Hagstrom Fantomen in white, currently on sale at Musician’s Friend with $150 off, guaranteed to take you from the pinnacle to the pit…View Deal