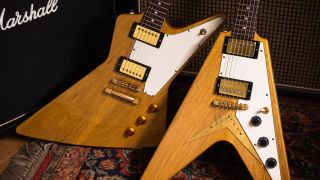 Back in July, Gibson announced its Authorized Partnership Program, allowing boutique makers Jimmy Wallace Guitars, Banker Custom Guitars and Echopark Guitars a license to use company trademarks, which include body shapes and headstocks for the Les Paul, Flying V, Explorer, ES-335 and Firebird, in their own builds.

Now, the first electric guitar models from one of those partners has been revealed, with Banker Custom unveiling the ’58-spec Korina V and Excalibur, built for sale exclusively at the Chicago Music Exchange.

According to CME’s Nathaniel Murphy, “Matt Hughes of Banker Custom was the first boutique builder to officially sign on with Gibson as part of the authorized partner program, which gave him unique access to Gibson trademarks, body shapes, and headstocks.

“We were chatting with Matt, and he told us about his private stash of super clean white korina and gorgeous Brazilian rosewood. So we asked him if he could build some '58-spec models, the first of their kind, and he did. And they are awesome.

“Chicago Music Exchange is proud to be the first and only dealer carrying these amazing instruments.”

You can learn more about these Gibson-authorized non-Gibson guitars in the video below, and head over to Chicago Music Exchange for more information.

These guitars mark the first products in Gibson's shift from confrontation to collaboration, following the removal of its controversial 'Play Authentic' video, which appeared to threaten builders making Gibson replicas, back in June.