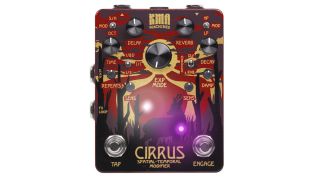 On the delay side, there’s Modulated Delay Mode (MOD) - which fluctuates the delay signal for a dynamic dancing tape echo-inspired modulation - Sample & Hold Mode (S/H) - which adds a sequencer-like filter in front of the delay line for synthy textures - and Delay Mode (OCT), which blends in a high octave as notes decay.

For reverb, the pedal offers Modulated Reverb Mode (MOD), which decorates trails with silky smooth movement, while the two additional modes deliver either an opening low-pass filter or a closing high-pass filter.

As a rather cool feature, all delay and reverb modes sport a sensitivity control that allows the effect to be altered by picking attack.

There’s also tap tempo, expression input, an effects loop and the ability to flip the routing with the reverb and delay.

Furthermore, the pedal's bypass footswitch offers standard latching mode as well as the ability to max out the decay by holding down the switch. Depress and hold the bypass and tap tempo switches together and, well, see for yourself.

The Cirrus is available for £185 (approximately $231), and starts shipping in mid October. To order one now, head over to KMA Machines.