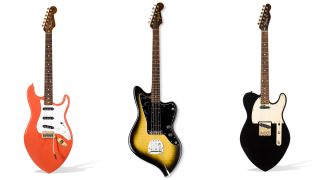 The models – a pintail Telecaster, pintail Stratocaster and teardrop Jazzmaster – combine Fender shapes with a “surf sensibility,” and never made it out of the prototype stage, making them the only three in existence.

The guitars were conceived by Skateboard Hall of Famer and Santa Barbara Surf Museum owner James O’Mahoney, and were intended to bring together the legacies of Leo Fender and surfboard legend Reynolds Yater, who were rumored to have spoken of a collaboration in the mid-1950s.

The finishes are by Jim Lombard, the electronics by Seymour Duncan and the flamed maple cap on the teardrop Jazzmaster by Paul Schürch.

The Strat boasts a coral-colored finish with extended shaped tail, rosewood neck with maple center strip, three single coil pickups, a white pickguard and gold hardware and is signed by Yater on the back.

The California Dreaming auction ends on August 12. For more information, head to Bonhams.