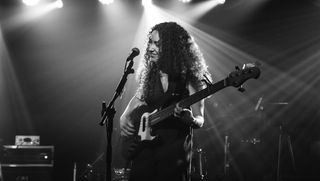 Today, we've teamed up with her to premiere the live-in-the-studio video for the album's first single, "Corner Painter."

Featuring Wilkenfeld on vocals and baritone acoustic, Blake Mills on guitar and Jeremy Stacey on drums, the video was recorded at East West Studios by Paul Stacey. You can check it out below.

"When I first decided I wanted to make a vocal album, I went into the studio several times with different songs and bands, searching for a musical direction that would resonate with me," Wilkenfeld told Guitar World.

"After I wrote the song 'Corner Painter,' I booked one day at East West Studios with Paul Stacey as my producer and engineer, his brother Jeremy Stacey playing drums and Blake Mills on guitar," she continued. "I felt like I hit the jackpot. I finally heard the sound around which I could craft an entire album.

"I went home and composed in a frenzy with this group of musicians in mind until I had another 10 songs I believed would work as a collection. Then, I booked the same studio and cut all the remaining band tracks with the same ensemble, with the addition of Benmont Tench and Zac Rae on keyboards."

Wilkenfeld also told Guitar World about how she ended up using Jackson Browne's baritone acoustic for the recording.

"I wrote 'Corner Painter' on a regular acoustic guitar but tuned it way down to the baritone range. When I sang the song to Jackson Browne right after I wrote it, he offered me his baritone acoustic to borrow for the recording. Like a little kid, I got so overwhelmingly excited singing this song in the studio that under the sound hole, I (unintentionally) scratched the shit out of it with my pick.

"I was so nervous when I brought his guitar back to him, but he was very forgiving. To my surprise, on my next birthday, Jackson gifted me a handmade baritone acoustic. What an unbelievably kind human being!"

Love Remains is set for release tomorrow via BMG. To preorder the album, point your browser this way.