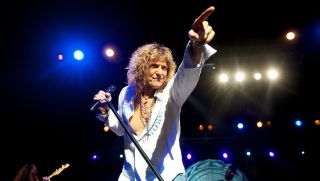 David Coverdale might not play much guitar, but given the fact that he’s been bandmates with everyone from Ritchie Blackmore and Bernie Marsden to John Sykes and Steve Vai, the man clearly knows a thing or two about electric guitar heroes.

Which is why it’s worth listening up when the Whitesnake leader has a thing or two to say about the current, um, guitar world.

In a recent interview with Subculture Entertainment, Coverdale expounded on the state of the instrument in 2020, as well as what he looks for in a live performance.

"If you listen to Flesh & Blood [Whitesnake’s 2019 album], you can hear that the individual performances are all incredible,” Coverdale said (via Blabbermouth).

“The rhythm section is a separate entity and the incredible guitar interplay is like a beautiful sonic tapestry. And I want that in performance that people get to see.”

Regarding the guitar in particular, he continued:

"A lot of the new rock bands don't really have guitar heroes, and, to me, it's fucking synonymous with rock. And also the sexy 'roll.' I'm not interested in just being a rock band; I wanna be a rock and roll band.

“I like the sex [element] in rock, which, that's the 'roll' aspect. The whole expression 'rock and roll' was [coined] in the blues and jazz days as a sex act: 'C'mon, baby, let's go and rock and roll.' Nothing to do with fucking guitars.”

Coverdale, however, does seem to think he’s got something special in his current guitar team, Reb Beach and Joel Hoekstra.

In an interview with Guitar Player last year, he commented: “I couldn’t ask for a better pair. You’ve got Reb, who’s a balls-to-the-wall but also incredibly melodic guitarist, and then Joel, who brings in a whole spectrum of incredible colors with his arsenal of musicality.

“They bring it all, and they fire on all six. They’re both scorching-hot guitar players.”