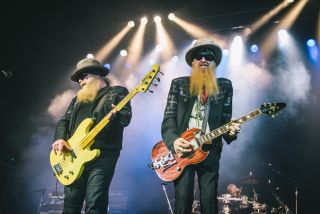 ZZ Top have announced the full details of their 50th anniversary tour. The trek, which kicks off August 16 in Washington, will feature support from Cheap Trick, with Lynyrd Skynyrd onboard for two shows in Irvine and Concord, California.

“It’s been five decades, and I think we’re starting to get pretty good at all this,” ZZ Top guitarist and singer Billy Gibbons said in a statement. “We’re truly excited to be appearing across the continent this summer and fall, playing our bluesy kind of rock like we started in ’69. The beards, Frank [Beard]’s excepted, are perhaps a bit longer, yet nothing else has changed.  We’re keeping it that way.”

Tickets for the trek go on sale beginning April 12th.

For more information, head over to zztop.com.

* with Cheap Trick
**with Lynyrd Skynyrd