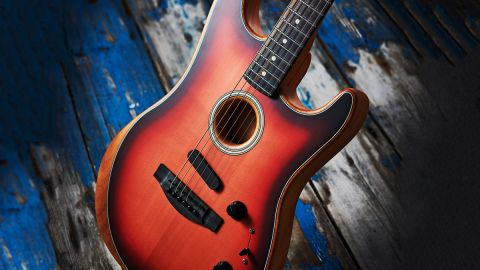 The Acoustasonic Strat ups the ante with an even more versatile range of tones than the superb Telecaster, and its inventive hybrid build remains a joy to play.

Call it shock of the new, but just a year after Fender launched its American Acoustasonic Telecaster, doesn’t it look less radical now and more a part of the furniture? That familiarity certainly informs this new 2020 Stratocaster version.

With its natural or coloured inset spruce top, it initially appears far less modern than its original sibling, albeit far from our vintage friends. Whatever your thoughts are on that, there’s little to dispute the fact that the Acoustasonic platform suits the once pioneering Stratocaster style.

Even before you plug in to explore the different acoustic and electric voices, it has a surprisingly strong and full voice, and while it obviously won’t challenge even the smallest of acoustic steel-strings for volume and depth, it’s roomy and resonant, an inviting playing experience. A very good start.

First and foremost it is an acoustic guitar, albeit with a relatively small soundbox chamber and that central soundhole colloquially referred to as the ‘doughnut’, which is officially called the patented Stringed Instrument Resonance System (SIRS).

It’s more a soundport than a simple hole in the top to let the air out and, as Fender’s Tim Shaw discusses elsewhere in this feature, it was the key to kicking off this Stratocaster version.

Shape aside, there is little difference in its construction from the Telecaster version. Both mahogany neck and body have quite a textured feel that will benefit from playing and probably burnish the seemingly near bare wood.

Like the Tele, it’s a full Fender-scale bolt-on but with acoustic strings, including a wound third string, acoustic-style bridge and compensated saddle – very much an acoustic/electric hybrid. And that’s exactly what it is and it leans almost as heavily as the Telecaster on those amplified acoustic voices.

So, like the Telecaster, we get a master volume and a five-position lever Voice Selector switch, which offers five pairs of voices (A and B) that can be voiced individually or as a blend of the two via the Mod control.

Powering for the extensive onboard electronics comes not from a conventional battery but a simple USB plug on the circular output jack dish. And, yes, just as you would your phone, you’ll need to charge it before it’ll work.

It’ll probably be the lightest Strat in your collection, and even though it’s very slightly heavier than the Tele we reviewed last year, at 2.32kg (5.1lb) it’s light in anyone’s book.

As we mentioned in our introduction, however, it’s the unplugged acoustic sound that initially impresses with surprising volume and a strong mid-flavoured voice that you could probably put a mic in front of and capture quite an accurate acoustic archtop or even Selmer Maccaferri-ish voice.

The response is balanced across the range, too, from big and vibrant first position chords up to strong-sounding high-fret lead lines, which, of course, this Strat excels at; for an electro-acoustic electric guitar, the fingerboard access is stupidly good.

We initially plug in via our acoustic pedalboard to an AER combo and from the off it’s game on. In terms of playability, you’ll have to get used to a tougher feel if you’re coming from your regular Strat, because it ships with Fender Dura-Tone coated phosphor bronze 0.011 to 0.052- gauge strings.

But the ‘deep C’ neck profile is exactly the same as Fender’s Professional series, except it has a slightly flatter fingerboard radius. Setup on our sample was pretty much bang on 1.6mm on treble and bass sides. Gauge and string type aside, you’re playing an electric guitar here.

Plugged in, it’s a different, mainly acoustic world. In positions 5 and 4 you really should be able to find a sound whether you’re strumming hard where those dreadnoughts do their thing or losing your pick for some mellower fingerstyle on the smaller-body voicings, which don’t sound ‘small’ at all if we’re honest.

The addition of the top pickup in position 3 adds a touch of ambience to the sound as well as making the top livelier if percussion is part of your style; simple rhythm taps sound very natural.

This Strat’s obvious competitor is the Acoustasonic Telecaster, which is priced the same. Shape aside, it has less crunch for the electric voice and the acoustic sounds are slightly different from those on the Stratocaster.

Conventional acoustic/electrics typically stay in the analogue world, mixing an under-saddle piezo or body/neck sensors with one or more magnetic electric pickups. Taylor’s T5z Classic (which has a dealer price of around $1,999/£1,900 with gigbag) is a recommended example.

In many cases, via dual outputs, you can use two amps – one for the acoustic side, the other for the magnetic. PRS’s Hollowbody II Piezo allows you to do exactly that with its PRS/LR Baggs piezo pickup system, but it’s a more serious investment with full retail from $4,900 / £4,749.

By design, the Acoustasonic platform is about much more than simply giving you some pretty impressive acoustic sounds. Swap over to your electric rig and the three shades of that clean magnetic pickup are equally impressive.

There’s a bit more body and output to the sound compared with our reference Strat, albeit with a shorter note decay, and there’s a lot of fun to be had kicking in various boosts and overdrives. You could pretty much find a place for this in anything from old blues to modern country, or more classic Americana or altrock.

We were surprised just how good a rhythm guitar this is with more crunch and gain than we’d considered, and that’s before we add some dirty fuzz or ambient delays and reverbs. This thing loves effects! It also sounds great as a really swampy slide guitar.

Clearly, new guitar design is alive and well. There’s a very ‘open book’ vibe here. On one level it’s a lightweight electric-sized electro-acoustic with some highly credible acoustic voices without the big body – and feedback potential – of the real thing.

If you used it for solo function gigs alone it’d soon pay you back, but that’s missing so much of the instrument’s potential that can begin to be realised once you plug into your electric rig and pedalboard.

The voicing of that bridge pickup is superb and the clean, hair and hairier crunch will soon have you rocking out. While there’s only one sound pair where you can blend acoustic and electric, it’s extremely well voiced. Our test time only scratches the surface of the instrument’s potential.

Yes, Fender could (should?) provide us with an optional saddle that’s compensated for a plain third string, and we can only hope that sometime soon a version with a neck pickup surfaces for those of us with jazzier tastes.

But until then, for the creative musician, or simply someone who wants quality acoustic sounds in a very easy and ergonomic package, there’s nothing quite like this. And if push comes to shove, we prefer it to the original Telecaster. Superb innovation.

Exactly like the Acoustasonic Telecaster that preceded it, when you remove the controls’ rear backplate you get some idea of the considerable technology at play here. The big PCB, which has over 380 components, we’re told, is a very alien sight – about the only ‘normal’ thing is the five-way lever switch!

Remove the central backplate (which holds the battery pack) and where you would expect to see springs and vibrato block, it’s equally unusual: there’s the Fender N4 MVT magnetic Noiseless pickup, and between that and the string anchor point is the rectangular top/ body sensor, the Fishman Acoustasonic Enhancer.

You can’t, of course, see the third pickup, a Fishman piezo transducer, under the compensated saddle within the bridge. But what’s clearly visible is the hollow nature of the guitar and the two small longitudinal top braces running either side of that doughnut soundhole.