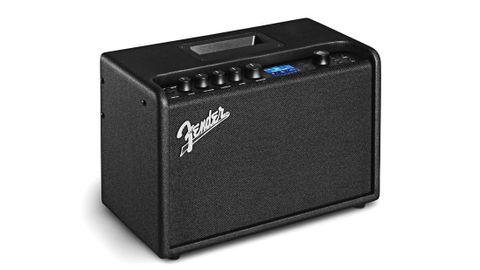 The new update adds some serious functionality improvements to the Mustang line, but what it’s really about is that sweet new suite of amps.

I’ll admit to having a little bit of a brain-jam over the fact that Fender offers a very traditional, longstanding guitar model called the Mustang, as well as a very modern digital modelling amp of the same name. But the Mustang guitar has its roots in Fender’s early student guitars, and the amp line has a bit of the same ‘make it easy for everyone’ spirit, so in another way it totally makes sense.

The Mustang amp line is designed to take new firmware updates, which can be as simple as changing the taper of the control knobs in response to player feedback, right on up to entire new amp models; an update pushed out in September adds a variety of new amps inspired by models by brands like Mesa Boogie and Friedman, as well as a handy tube preamp model for recording.

Out of the box, the Mustang GT features 21 different classic amp models based on legendary Fenders like the ’59 Bassman, ’65 Twin, Princeton and Deluxe, right on up to high-gain, metal-voiced models like the Metal 2000 (based on the EVH 5150III) and ‘90s American (based on the Mesa Dual Rectifier). There’s even one of my favourite Fender amps, the Super-Sonic, which offers some intriguing cascading gain opportunities.

There are also over 45 different effects covering all the expected categories, including delays, reverbs, chorus, specific overdrives and distortions based on classics like the Ibanez Tube Screamer and MXR Distortion+, and even a Ranger Boost based on the Dallas Range Master treble booster – a key ingredient for early metal tones of the Iommi variety.

But the new update adds much more: IIC+ clean and lead models, three Bassbreaker 15 models, an Acoustasonic model for use with piezo equipped electric and acoustic guitars (based on the preamp from Fender’s Acoustasonic amps), an Acoustic Simulator for making your electric guitar sound like an acoustic through an Acoustasonic, a Dual Showman model, and the aforementioned Tube Preamp model.

That’s still not all, though. There are two new modulated reverbs, Mythic Drive (based on the Klon Centaur), Sustain, a 2290 Delay, Memory Delay (inspired by the EHX Deluxe Memory Man) and Metal Gate (inspired by the ISP Technologies Decimator II G String pedal).

There are also 10 new cabinet sims, backup and restore of presets and setlists via the Fender Tone app; advanced tuner view; Bluetooth icons for tone and streaming; tap tempo subdivisions; footswitch effects assignment; quick-save of presets to a setlist; a new setlists shortcut; new FX categories; improvements to the keyboard for entering text; and a newly reorganised menu. Setlists are now limited to 24 setlists and a ‘favourites’ setlist (25 total), and 50 presets per setlist.

The optional MGT-4 Footswitch gives you four special Mustang GT modes: Quick Access, Presets, Effects and Looper. On first glance, it looks like a pretty complicated footswitch, with multiple labels in order to allow the switches to multitask. But you’ll get the hang of it.

There’s also an optional EXP-1 Expression Pedal, which lets you control the master volume or any number of amp and effect parameters from the obvious (like wah) to the out-there.

We’ve reviewed the original Mustang GT release in the past, so let’s take a look at the new models. First up, I have to say, the model based on the Friedman BE-100 (called FBE-100 here) is so good that it would be worthy of being packaged separately as its own combo amp.

It nails that chewy upper-mid, hairy treble, tight bass Friedman vibe with amazing precision, and can be configured to unleash all your Jerry Cantrell fantasies. It’s incredibly reactive to pickup selection and guitar volume changes, and it’ll adapt to your phrasing like nobody’s business. It’s really a new high watermark in Fender’s amp modelling.

The IIC+ Lead sounds great, too: the classic Metallica and Dream Theater sounds are lurking in here, but just like a real Mesa, so is your own sound. It might take some tweaking to find it, but all the elements are here, right down to the weird Mesa midrange vibe that feels a little bit odd on its own, but sits perfectly in a band mix.

The Acoustasonic and Acoustic Sim models are really handy, especially for those who use Mustang GT amps live with a footswitch and the Setlist function – zip in and out of acoustic mode and full-on metal mayhem as you please. And the Tube Preamp model is great for those ‘70s ‘clean guitar straight into the desk’ tones, but you can also use it for vocals, keys and bass with great results.

The Modulated Large Hall Reverb is a great standout for shimmery ambient effects, and the Mythic Drive is very responsive and detailed, as you would expect from a Centaur model. The Metal Gate is also going to please a lot of players, since it can help tame the Mustang GT’s potentially lethal levels of gain under extreme metal and djent conditions.

The new update adds some serious functionality improvements to the Mustang line, but what it’s really about is that sweet new suite of amps.

The FBE-100 model is good enough to be your go‑to sound for all rock and metal needs, and acoustic modes really enhance the utility of the amplifier. The new effects don’t revolutionise the amp quite as much, but they’re still very welcome additions to the fold.

And this update shows that Fender is nowhere near done with continuing to develop new and interesting sounds for this amplifier, so if you already have a Mustang GT, you now have some great new tones and textures to work with. And if you don’t have one yet, Fender is really demonstrating their commitment to enhancing the experience long into the future.