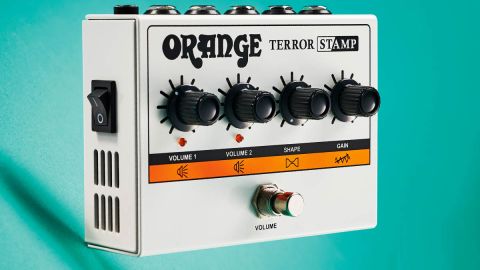 The Orange Terror Stamp has some very persuasive drive tones and makes an excellent pedalboard-friendly rig on the fly or backup amp option. It's a lot of amp for the size and price.

If you’ve lusted after a company’s valve-driven heads in the past but have been priced out, or can’t justify the outlay to try an extra amp to add to your arsenal, these things are very good news.

A prime example is how Victory’s range of preamp pedals brought the tones of three of its most popular £1,000 heads to your feet for £349. Now, Orange are combining a preamp and power amp in an even smaller package. Surely something’s got to give?

Orange were at the forefront of the lunchbox heads movement that’s still going strong, eventually sizing down to Micro Terror and Micro Dark that this is the logical next step from. Small stompbox-sized and weighing under a pound, the Terror Stamp is titchy. The company claim it combines the Micro Terror and Dark – a potent combination if it can pull it off .

The layout is simple, especially so compared to the likes of Blug and Victory, with a switchable master volume offering an instant boost for your leads, alongside a shape control that is key to shaping your tone and the all-important gain. No bass, middle or treble here. The streamlining is actually liberating.

It may be small, but the Terror Stamp is LOUD. People are going to be surprised by how loud it is. It also becomes apparent this sounds like an Orange amp – articulate, full... Did we mention loud?

On its own, the Terror Stamp is versatile and based in the Micro Terror’s territory; from rolling back to a light chimey gain to Orange mid spank and poke and fuller bore fuzz-tinged heavy rock.

It’s gain range plays very well as a pedal platform; namely the overdrives we tried out with it (such as the Korg OD-S) that enable more gain voices for your palate, and you’ll need one to get it into those scoopy metal chug realms. And while the stamp is loud with gain, dialling back to crystal clean might see you struggle in a band mix.

It feels like Cliff Cooper’s company have packed a lot into the little Stamp – great Orange tones at a great price and all at your feet.

Some players may not appreciate Orange’s aversion to three-band EQ controls, but the shape control is very sensitive and versatile, and you can further tweak by aligning the Terror Stamp with other pedals.

Whether it’s your backup amp, introduction to Orange, portable rig or a power amp for a modeller, this is one of the best gear buys of the year.