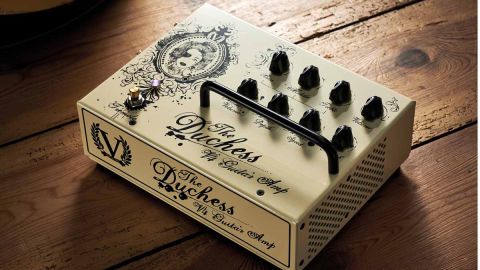 The V4 Duchess is an inspired design that combines artistic flair with a deep appreciation of what makes for great guitar tone.

Victory Amplification’s onward march toward domination of the world boutique guitar amp market had another boost at this year’s NAMM Show, with the arrival of a rather tasty valve-driven head that’s small enough to live on most pedalboards.

Launched from the same design springboard as Victory’s V4 pedal preamps, ‘The Duchess’ amp is just a little larger but contains a Class D power stage that can deliver a whopping 180 watts into a four-ohm load. As if that wasn’t enough, there’s also a smooth digital reverb and a tremolo effect.

Another reason for the V4 Duchess’s slightly increased dimensions is that the mains power supply is built in, so there are no wall warts to pack in your gigbag, just a regular kettle lead.

As you’d expect from Victory, the build quality is first class, with a tough powder-coated steel chassis and mini chickenhead knobs protected by a raised steel kick bar. Cooling is assisted by a 60mm fan on the left-hand side of the chassis that is permanently on and lots of perforations on the right-hand side.

The fan is there mainly to reduce the chassis surface temperature rather than protect the electronics, and Victory has tweaked voltages and speeds to arrive at a workable compromise between cooling and noise; however, there’s no ‘off’ switch.

Inside the chassis, the layout is similar to the V4 pedal preamps but busier, with no less than nine circuit boards of varying sizes and a fair amount of carefully routed wiring. The valves sit horizontally on their own board in ceramic sockets.

The Duchess uses the same valve complement as the other V4 models, with an EC900 triode in the V1 position followed by three CV4014s. These look a little like regular 12AX7s at first glance but aren’t. The CV4014 is a military version of the EF91 pentode.

These valves were made by Mullard in the early 1980s to NATO specifications and represent the last and best of the British valve manufacturing industry. They were liberated from storage in a former cold war nuclear bunker and boast a minimum lifespan of 6,000 hours, which makes it possible for Victory to offer an impressively unique two-year warranty on them.

The Duchess’s single-channel preamp is easy to navigate, with controls for Volume, Master Volume, Bass, Mid and Treble. There’s a level control for the built-in digital reverb, and Speed and Depth controls for the Duchess’s tremolo effect, which is activated by an onboard switch or a remote single-button latching footswitch. A smart violet LED positioned above the footswitch informs you the tremolo is on.

On the rear panel, there’s a single input jack, a remote footswitch jack, a pair of send/return sockets for The Duchess’s series effects loop, a balanced line out, and a single loudspeaker outlet. Another useful extra is a standard nine-volt 500mA outlet, which can power other effects.

Overall, the V4 Duchess is typical Victory – built for the rough and tumble of professional touring, either in pedalboards or on top of speaker cabinets. While tipping a pint of beer over it would not be recommended, it should stand up to any amount of rough treatment.

It might look pint-sized, but this is really all about massive valve-sweetened clean sounds. There’s some natural overdrive from the all-valve preamp, which sounds fabulous for contemporary Robben Ford-inspired clean soloing tones, but things really start to happen when paired with your favourite overdrive pedal.

We tried combining The Duchess with a couple of Tube Screamer and Centaur replicas, as well as a Zoom MultiStomp, which packs a selection of digital overdrive and distortion pedal models. All of these can be run off The Duchess’s built-in DC outlet with current to spare, though some multi-effects can be hungrier and may still need their own power source.

We teamed the Victory with a 2x12 open-backed cabinet fitted with Celestion Vintage 30 speakers, making a total eight-ohm load into which the V4 Duchess delivers a solid 90 watts.

Even at roughly half of its 180 watts maximum output, The Duchess offers exceptional clarity and headroom and is almost brutally loud, easily capable of overpowering most drummers in an unmic’d gig environment.

The all-valve preamp works to sweeten the tone and enhance any drive pedal’s best features, while acting as a truly stupendous clean channel. The Duchess’s onboard effects are superb, too.

The digital reverb sits on the border between warm and bright, while the tremolo adds plenty of vintage atmosphere, giving The Duchess a seductive contemporary Twin Reverb-inspired vibe. There’s more than enough range on the Speed and Depth controls to cover any need, from punky staccato warbling to deep pulses that conjure up evocative 50s vibes.

The balanced line out is clean and powerful, too, although there’s no speaker emulation. Victory argues, quite logically, that there are now so many standalone emulators, it makes sense to leave users to find their own ideal solution if they need one.

Inside the V4 Duchess is an always-on fan to stop the chassis surface going above comfortably warm. The speed has been tweaked to reduce noise to sensibly low levels without compromising performance.

The single speaker outlet can deliver up to 180 watts into a four-ohm load. That’s serious power that can easily dominate a stage, with practically infinite headroom.

Full-output protection means if you just want to use the balanced line out for recording, you don’t need to have a speaker plugged in.

The V4 Duchess has a straightforward layout that’s easy to drive, with Speed and Depth controls for its foot-switchable built-in tremolo effect, and a Reverb level control.

Compact is as cool as ever, and Victory does compact better than most other manufacturers. There may be some solid-state heads that offer more functionality perhaps, but the V4 Duchess’s big temptation is its unique preamp design, powered by four of the best valves ever made in the UK.

If you team The Duchess with Victory’s V112-Neo cabinet, which houses a single four-ohm Celestion Copperback capable of handling 250 watts, you’ve got a supremely portable rig capable of producing earth-shattering volume, while the head on its own will fit into any overhead luggage carry bag.

Aimed at professional players and serious amateurs looking for a lightweight solution that doesn’t compromise on tone or quality, it’s hard to believe that The Duchess packs as much power as two Twin Reverbs into a box the size and weight of a large paperback.

Quality at this level doesn’t come cheap and we think that, overall, the V4 Duchess is excellent value for money. It’s an inspired design combined with artistic flair and a deep appreciation of what makes for great guitar tone, or as Victory’s founder and designer Martin Kidd says, “it’s quite the little box”.