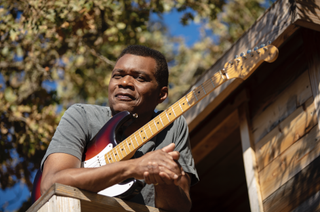 Got a question for your favorite guitarist? Let us be your go-between. The concept is easy: you submit your queries and we pass them on to some of the world's greatest guitarists. Only the sharpest and funniest questions will be used.

This month, we're giving you the chance to ask Robert Cray anything you want! You can grill him about his instantly recognizable tone and signature Fender Strats, his just-announced new album (the Steve Jordan-produced That's What I Heard), performing with Eric Clapton, John Lee Hooker, Buddy Guy and Stevie Ray Vaughan, or whatever else comes to mind. Nothing's off limits!

Just email your questions to GWSoundingBoard@futurenet.com and write 'Robert Cray' in the subject line. Remember to include your name in the body of the email so you can get credited in the magazine and impress your friends, neighbors and random strangers at the 23rd Street PATH station!

While you're thinking about your question, be sure to check out Anything You Want from Cray's new album!